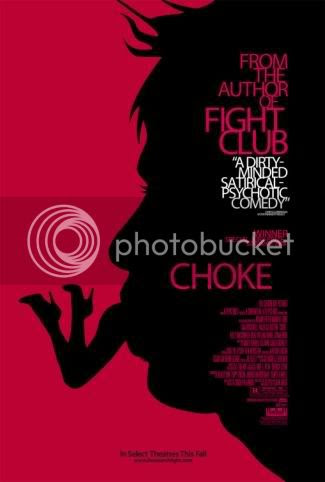 When reviewing films based on a previously existing source material that one is not familiar with, one is deprived of a potentially insightful angle into the creation of that film; though a great fan of Peter Jackson's Lord of the Rings films from the first time I saw Fellowship of the Ring, it wasn't until I picked up Tolkein's original text that my respect for the adapted screenplays officially shot through the roof. In the case of writer-director Clark Gregg's Choke, an adaptation of what many describe to be a lesser work of famed novelist Chuck Palahniuk, I want desperately to comment more in depth on the page-to-screen mechanics at work, particularly as compared to David Fincher's masterful Fight Club. Nevertheless, even without that particular bit of insight, I can state with plain assurance that Choke sucks, regardless of how weak its source material may be. If Fincher's film can be described as thematically multi-layered, stylistically labyrinthine, deceptively self-aware and self-reflexively brilliant, Choke comes across as squandered dime-store philosophy by way of a reductively sophomoric Scrubs aesthetic, trading in quirk for the sake of quirkiness and a botched attempt at duplicitous storytelling that by all rights shouldn't pass a community college Screenplay 101 course. To be fair, Clark Gregg's film is, in its own modest way, both daring and audacious, but that doesn't mean it's able to chew even a portion of what it's chosen to bite off. Sex addiction, unforeseen manifestations of divinity, political radicalism, self-induced choking as a means to acquiring empathy and many more meaty topics get lumped together in a confused and barely subversive satire that is at best uneven, at worst, clueless.
No comments: