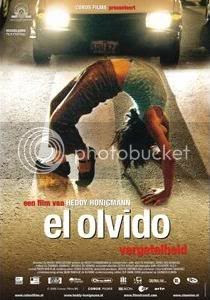 Oblivion offers a sobering, often heartbreaking surveillance of Lima, Peru's economic despair, although its title proves deceptive insofar as the film finds hope in even the most down-and-out of scenarios. Local native Heddy Honigmann's documentary focuses on a cross-section of citizens with their backs firmly against the wall, most frequently returning to a group of young people who perform stunts during red lights at the crosswalks of a major intersection in hope of spare change handouts, a dangerous occupation that takes its tolls in ways both big and small. The film never settles for easy manipulation and repeatedly taps into the emotive power of the close-up, its subjects speaking at length about hardships past and present; the film breaks away only once, momentarily, after a devastating reveal by a young boy who spends his days shining shoes. Intercutting footage of recent presidential inaugurations between subjects, the film contrasts real-life hardships with the superficial parade that passes for the country's "politics of amnesia"; Oblivion maintains its focus on Peru but its examination of corruption renders its insights universal. "Bandit is too good a word", says one citizen about several past leaders (many subjects discuss Alan García with bitter specificity), but what sticks more than these people's attitudes towards their government is their unrelenting resilience, best summarized by the motto of a small-time shop owner: "We can fix anything. Nothing's impossible. Everything can be repaired."
6 comments: 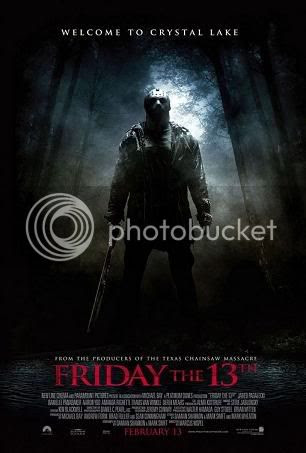 Of all the remakes one might have thought capable of improving on the original, the newly revamped Friday the 13th stands as an ultimate case of upended expectations. The 1981 film, taken entirely, is downright lousy, although a standout climax in which overwrought camp reaches an almost profound - if poorly justified - level of absurdity does make it something of a modern horror classic (my favorite of the series: the parade of retarded sci-fi cliches that is Jason X). Onscreen gore usually makes my cringe (in a good way, when it's with bravura and purpose), but that of Friday the 13th '09 reaches a nadir of emptiness in its cynical provocations; only the ostentatious psychical/psychological orchestrations of the Saw films surpass it for poseur nihilism. Forget the plot - a dead-end dump bin of dusty conventions employed without humor, style or imagination - and focus on the ultra-regressive demeanor in which the film's cattle-for-the-slaughter are punished for their hedonistic ways. If nothing else, the film can be noted as self-aware, deliberately upending the expectations countless films of similar ilk have employed since the original misadventures at Camp Crystal Lake seemingly lowered the genre's standards for all time. Barely watchable, this thing is never so much scary as it is outright abusive. The remade Jason comes to us feeling like a ripoff of Rob Zombie's buffed-up re-imagination of Michael Myers (a film I somewhat panned initially, but one I've since come around on as one of the finer horror remakes), just another indication that Mr. Vorhees has always been a third-rate cousin of Halloween's chilling embodiment of evil. The year is young and we already have a contender for worst film.
2 comments: 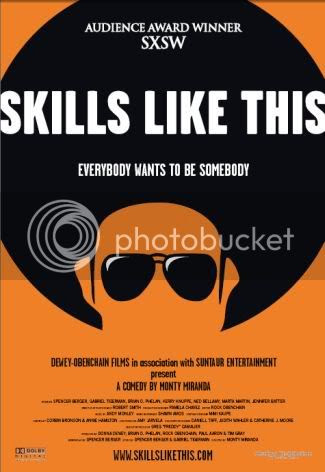 In its opening act, Skills Like This displays a markedly rebellious attitude that, while chief among its strengths, also highlights the more basic manners in which this likable indie comedy fails to completely get off the ground. Disgusted with his own attempts at writing, Max (Spencer Berger, also the screenwriter) goes out on a limb in a moment of inspiration and robs a local bank in an altogether creative manner that, when all is said and done, leads to a relationship of sorts with Lucy (Kerry Knuppe), the very teller who hands him the money during the stick-up. The natural high that accompanies his newfound talent sees him continue with a small streak of acts suggestive of Robin Hood, proving both inspirational (to those who see it as a bold act of self-definition) and alienating (to those who see it as childish and depraved) to those around him. Insofar as it focuses on Max's strange new hobby, Skills Like This generates an eclectic buzz, one aided by its grungy low-budget feel and do-it-yourself filmmaking ethics, not to mention the almost-genius sight gag that is Max's Q-Tip afro. On the flipside, these elements clash with the paralleling narrative thread of Max's friends and their respective efforts at deflecting apathy, the majority of these scenes playing out like knowing retreads of Office Space and other, better films that seem to have inspired this one. Somewhere between the performer's chemistry and the editing of the final cut, the raw energy purported by their misadventures dissipates into semi-stale mania that feels more planned-out than off-the-cuff. Add to the mix a plot device involving one of Max's hospitalized relatives (less cloying than it is pure filler), and what one finds is a film they want to like far more than they actually do.
No comments: