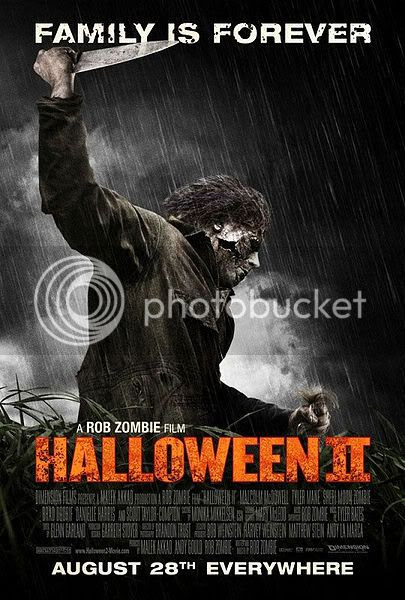 The good news about Rob Zombie’s Halloween II (a sequel to the remake, not a remake of the sequel) is that it amplifies the strengths of its predecessor, a film I lightly panned upon first release, but have since come to appreciate more despite its shortcomings. The bad news, then, is that those shortcomings have also been amplified. Like the original Halloween II, Zombie’s film picks up the torch just after the conclusion of its predecessors October 31st bloodbath, here to detail the escape of the Michael Myers as his seemingly deceased body is transported from the scene of the crime. Approximately one year later, Laurie (Michael’s little sister, still unaware of her familial roots) is still trying to cope with the loss of her adoptive parents, while Dr. Loomis (Malcolm McDowell) is distastefully promoting his published account of the Myers killings. As the monstrously sized Myers (Tyler Mane) continues to leave a trial of human destruction, these two threads find themselves on a collision course that culminates on (you guessed it) Halloween night. First, the good: this film might be the most artfully rendered slasher sequel ever made, each slaughter portrayed with a revelatory intensity that suggests far more carnage than is shown outright, the jagged camerawork and muddled visuals evoking an existential meeting between predator and prey. As one overzealous fan of Dr. Loomis states it, Myers "eats at the core of the victims soul”.

Alas, Zombie’s dark poetry only goes so far without more substantive justification, as the dreamlike images of Myer’s mother (Sheri Moon Zombie) and his childhood self (Chase Wright Vanek, replacing Daeg Faerch) don’t pry deeper into his pitiless, carnivorous psyche so much as they flaunt said perversions (a ravishing sequence shot in the vein of silent-era German expressionism ultimately proves the tip of a nonexistent psychological iceberg). Similarly unsubstantiated is the subplot of Loomis’ controversial book, which has garnered him death threats for the purported exploitation of Myers victims (of which Loomis had already nearly joined the ranks); save for the doctor’s own course personality and the flaunted gullibility of a media-saturated audience, this narrative thread ceases exploration at the surface level. Maybe that’s the point – that we’re droll cattle unwittingly lining up for the slaughter – but even if one is to embrace it from so nihilistic a standpoint doesn’t better the flat execution (all potential for satire croaks upon the utterance of an Austin Powers riff that’s been gathering dust for over a decade). The emotional anchor provided by the always-great Brad Dourif proves something of a saving grace during the final act, but it's not enough to correct the entirety of the preceding aimlessness. Let’s hope that Zombie’s next project cuts the filler and jettisons him back to Devil’s Rejects levels of greatness.
1 comment: 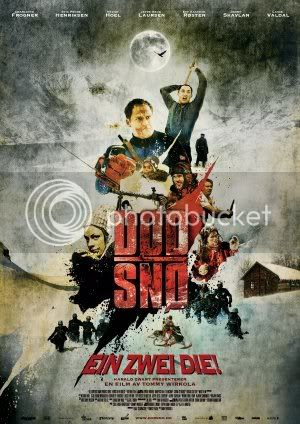 With the possible exception of Planet Terror, Dead Snow might be the dorkiest zombie film ever made, and I say that in praise. While the pre-credits opening – a hilariously self-aware, subversive chase scene scored to “In the Hall of the Mountain King” – stands as an easy comedic high point, that the rest of the movie holds up in comparison further underscores the overall stability and sly invention of the genre-riffing glee that is to follow. One of the few existing members of the Nazi zombie subgenre, this otherwise traditional tale revels in both the archetypal and schematic even as its violent means of dispatching both villains and protagonists proves more unpredictable than not. A group of medical students – played by an able cast, wisely straight-faced against the surrounding absurdity – finds themselves under attack during a weekend getaway at an isolated cabin deep in the snow covered mountains of Norway. Though well-equipped with movie-centric knowledge on how to survive such a confrontation – provided via a cinephiliac character whose T-shirt of choice proves an ominous bit of foreshadowing (all that’s missing is a baby) – they prove too heavily outnumbered by the squadron of the undead (which still operates according to rank, a humorous touch sadly not maximized to further effect) to simply stay put. Modestly ambitious and highly successfully within its chosen territory, Dead Snow proves to be one of the punchiest horror flicks in recent memory and one of the more capable within its low-budget constraints; the silent, lifeless landscapes make for a chilling tension-builder between each over-the-top set piece, while a memorable third-act shot of a character trapped beneath the snow is more nightmarishly claustrophobic than anything in The Descent. For the title of Best Zombie Comedy of 2009, Zombieland has a worthy competitor.
No comments: