The foul mouth of a boozing, smoking, purportedly all-things-unprintable Teddy bear come to unnatural life is an effort at R-rated boundary pushing whose success or failure is likely to fall in line with individual viewers' opinions concerning whether or not creator Seth MacFarlane's commercially successful television show Family Guy should have been renewed after its initial cancellation. Although not without moments of inspiration and, arguably, comedic genius (Wallace Shawn's cameo in "Sibling Rivalry" comes to mind), the increasingly diminishing returns of that series are also evident in this poor attempt at subversive raunch, one most frequently defeated by an insistence on meaningless hot topics references and outright nasty cultural Easter eggs, few of which suggest that anything other than opportunistic nihilism is driving the proceedings' annoyingly insistent "look at me!" pandering. Only a protracted fight in a motel room between the titular fuzzball and a well-cast Mark Wahlberg begins to tap into the absurd potential of the concept; the rest amounts to middle school toilet humor with studio backing, an adult vocabulary, and a suspiciously generous affinity for Flash Gordon that fails to translates to the rest of MacFarlane's unimaginative pot shots.
No comments: 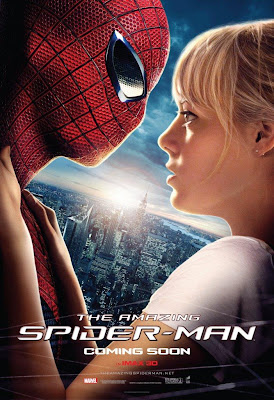 Though arguably unnecessary as far as reboots go (coming just five years after Spider-Man 3's fallout), The Amazing Spider-Man is as much a loose remake of the 2002 blockbuster as it is a virtual carbon copy of every other superhero origins story to grace the multiplex screens this past decade. Director Marc Webb ((500) Days of Summer) brings a levity and swagger to the proceedings that manages to avoid direct competition with its predecessor, and it'd be unfair to slander it simply on the basis of existing as a result of essentially greedy business practices. (I, for one, was livid when the plug was first pulled on Spider-Man 4, but so it goes.) That said, those films' strengths can't help but highlight this one's relative shortcomings. The webslinging is technically better looking this time around (a decade of CGI advancements will do that), but Webb's visuals simply can't compare to previous helmer Sam Raimi's knack for crafting the iconic (although Peter's use of his web before a first kiss counts as a small stroke of genius); whenever the film isn't being kinetic, its compositions tend to register as flaccid and monotonous. Similarly, while I saw the film in 2D, it seems poorly suited for the 3D mandate that ultimately caused Raimi to walk. Whatever the dimension, the action scenes sporadically want for a sense of continuity (the subway scene in particular is an editorial mess), whether for lack of proper coverage or simply a poor grasping of action movie mechanics. Where the film gets its energy, then, is in the performances: Andrew Garfield (The Social Network) as an appropriately cocky, sympathetic Peter Parker/Spidey and Emma Stone (The Help) as love interest Gwen Stacy make for a delightful leading duo with enough chemistry to make one hope we get to see them share screen time together under different circumstances. Amongst the supporting players, Martin Sheen is a standout in the pivotal role of Uncle Ben. Webb's talent for capturing idiosyncratic moments (the alarm clock bit is tops) almost compensates for the numerous deficiencies of the script, amongst them Peter's hard-to-buy, effortless infiltration of a high security lab, and an overall lack of narrative friction. There's not much in the way of an ebb or flow to the drama, and while it's a breezy and enjoyable two hours, unlike the best of this still burgeoning genre, there's almost nothing to take home with you after the lights go up.
2 comments: