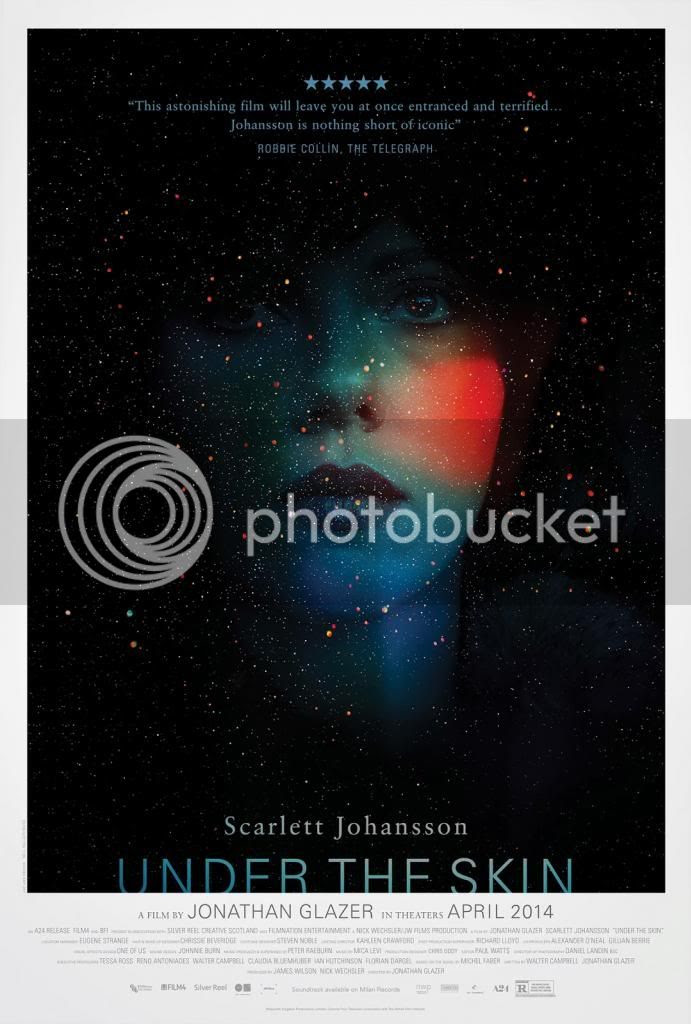 The impulse to compare filmmakers (especially those whose work might be described as "slow" and "arty") to Stanley Kubrick is one I wish we would get away from. Much as it might laud the man who might be my favorite to ever make movies, as a comparison, it's overused, reductive, and does nothing to illuminate the many ways these directors (e.g. Paul Thomas Anderson, David Fincher) are great; it merely states with hyperbolic obviousness that they are great, and it dulls appreciation of why and how they do what they do in favor of trivial flattery. Those feelings notwithstanding, it still seems within reason to note that the opening sequences of Under the Skin reminded me potently of 2001: A Space Odyssey. On first viewing, this was because of the basic connection of space-like darkness and star-like light; on second viewing, and more importantly, it was because I realized that I felt not unlike that film's primate characters, in awe of the monolith before then, transformed by sonic sensation, and more, into something unprecedented. Writer-director Jonathan Glazer isn't merely inspired by Kubrick's genius; he's standing on his shoulders (and Hitchcock's, and Roeg's...), and earning his place.

These quixotic opening images (and most of the film) refuse to provide any surrounding context, and as a pre-title plunge, they're an excellent primer for the dreamy, terrifying, sporadically funny, almost mathematically acute experience that follows, like a pressure chamber one might use to adjust to otherwise uninhabitable conditions. (Spoilers ahead.) A dot of light forms from seemingly nothing; an apparent detail shot suggests that this is the birth of a star; something aligns, something enters, a dulled voice begins cycling through the phonics of language, and the Kubrickian comparison is invited again by a jarring cut to Scarlett Johannson's eye. Named Laura in the credits but, as near as I can tell, nameless on screen, her character is everything and nothing, human yet not, that which we long for and that which keeps us from sleeping at night. I imagine these opening images to be her birth -- perhaps some metaphysical computer system coming online, or a virus downloading itself into the viewer -- but the film is better for leaving such literal interpretations there, in the realm of imagination. Under the Skin is among the most aptly named films I've ever seen, and Glazer's third feature is nothing if not an intense meditation on what it means, not to occupy a body, but to be one.

Under the Skin's loosely-drawn plot -- a female, ostensibly extraterrestrial, prowls Scotland for men, whom she lures into a black pit for mysterious and unknown reasons -- adapted loosely from Michel Faber's eponymous novel, isn't so much about the telling of a story as it is carrying a mental drag net, through which all manner of stimuli catch and mingle. As an alien invasion, the literal menace is subdued and distant -- the film hints at some larger plan spreading the countryside, if not further, and later implies that Laura's experience infiltrating humanity fails in part because she ultimately becomes too human (an unlikely correlation with the almost-equally batshit Robot Monster) -- but what stands out most is an unspoken essay on empathy, epitomized in a touching scene in which Laura offers a kindness that would seem to go against her directives, and which arguably sets up a later scene that acts as both savage humor and heartbreaking insight. (If Under the Skin can be said to function as a feminist statement, it's telling what many male critics assume about this woman, and women in general.)

Seen through Laura's eyes (she's arguably a proxy for the victims, and would-be victims, of sexual violence, and although the film eschews strictly feminist readings for something more thorny and universal, some implicit suggestions are eventually realized), Under the Skin allows us to see even basic things (shopping malls, parking lots) anew, with an emphasis on life being frequently definable as discomfort bordering on terror. The sins of human selfishness (the covetous man; the parents who think of themselves before the child) and the often cruel randomness of life (the man with a deformity condition) themselves become as terrifying as the black abyss in which Laura's unlucky prey find themselves. Scarlett Johansson's celebrity and sex appeal are recast as something, essentially, too good to be true, and between this film and last year's Her, it's fitting to see this talented woman finally reaping the fruits of her work in Lost in Translation (with the upcoming Luc Besson film Lucy, Under the Skin seems destined to be the central panel in an unofficial triptych of soul/body/mind), as good here as she has ever been, as capable of insect-like coldness as tender frailty.

A pair of scenes come as close to suggesting a character arc as anything else in a film with unspoken disdain for plot delivery, although, like everything else in this mad beast, they raise greater questions and deepen the surrounding mystery. An errant ant invites Laura's intense curiosity, her scrutiny later mirrored when she unexpectedly encounters her reflection, after a particularly shaping experience with humanity. The desire to know what lies behind our eyes is a uniting facet of existence, and therein her dawning realizations and autonomy lies...something, ineffable, beautiful, unforgettable. Metaphorically fertile and stripped of clutter, Glazer's achievement is pure cinema -- a philosophical line in the sand in a medium defined by such achievements. Under the Skin doesn't just affirm the movies' ability to draw us out of our worldview: it raises the bar. I can't wait to watch it five or six more times, at least.
1 comment: