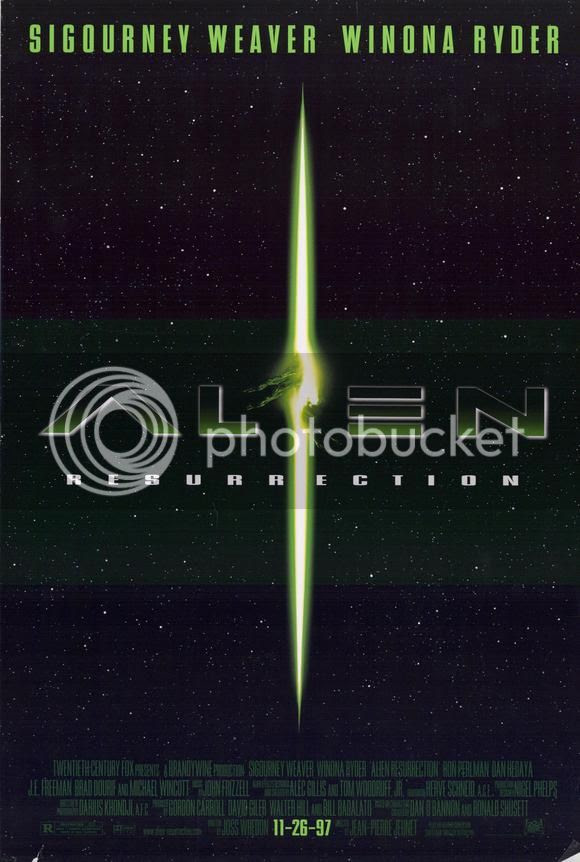 Alien: Resurrection's indebtedness to the work of Ridley Scott and James Cameron has been a damning one indeed - critics and filmmakers alike seem inherently unable to appreciate a perfectly good movie when it (a) follows in the footsteps of a canonized classic and (b) decides to take adapted material in a new direction. Change this film's title, a few key character names, and the titular extra terrestrials, and you'd still have the aesthetic essence that makes it - in my humble opinion - such an underrated and jolly good time. Had this been a stand-alone film, maybe more people would have picked up on its assaulting tongue-in-cheek comic book glee -- as an additional sequel to a franchise that had been flailing the last time around, it seemed destined to poor reception. What a pity. Roger Ebert is of the opinion that the movie hasn't "a single shot...to fill one with wonder." I beg to differ. An art director's wet dream, Alien: Resurrection has more visual flair than any of George Lucas' Star Wars films, and at times is damn near as fun.

Seeing as this retrospective is approaching the film's tenth anniversary, I'll make plot details brief. Ripley died in Alien³, having jumped into a vat of molten steel so as to kill the gestating alien queen inside her chest, thus eliminating this most dangerous of life forms. Some 200 years later, government scientists have recreated Ripley from frozen blood samples, alien embryo intact and all. Several unfortunate side effects abound: Ripley retains some of her memories via genetic instinct, including her anti-alien sentiment, and the cloning procedure resulted in the mingling of some of Ripley's and her "child's" DNA, bestowing our beloved heroine with super-human sensitivity and, yes, acid-tinged blood. The motherly instinct she once had for Newt now translates to a sixth sense of alien life forms, and her newfound attitude predisposes her to a series of hilarious feminist one-liners.

Hired to replicate the look of his City of Lost Children, Jean-Pierre Jeunet (who would later go on to make the popular Amélie) films Resurrection like a comic book fascimile of Ridley Scott's original; fish-eyed lenses, exaggerated dialogue and wide-eyed overacting abounds, however grounded by the film's meticulous vision of its futuristic environment (the detail work is impeccable) and no-bullshit sense of moral codes. A space crew delivering some precious "cargo" to the aforementioned scientists provides the film's diverse cast of characters - broadly drawn personalities embodied by eager performers willing to find subtlety in archetypes. The newborn Ripley gives veteran Sigourney Weaver something more substantial to chew on, but for the most part everyone on board is simply having a good time, even (and particularly) when that simply involves going through the motions of genre conventions. The brilliant and undervalued Brad Dourif contributes greatly to the film's anti-vanilla kinkiness, while Ron Perlman foreshadows his grungy Hellboy attitudes well within the realm of the R rating ("I am not a man with whom to fuck!").

At its core, Resurrection isn't much more than another extra terrestrial slasher movie with a countdown affixed to the end - a Poseidon Adventure set in outer space. Yet whereas most films of this type focus on gruesome body counts or overly serious dramatic set pieces, this unheralded sequel lends both attention and concern to its characters, while its pitch-perfect exercising of scenes viewers are likely to have seen dozens of times before lends them a refreshing degree of raw efficiency (the set design and enriched cinematography, on the other hands, just makes it fucking cool). Alien may have been heavy on vaginal imagery, but Resurrection is downright erotic with its deep blacks, slimy, shiny surfaces and deliberately stylized action. Every film in the Alien series - discounting the godawful video game that is Alien vs. Predator - is notable for their own distinct vision and feel. Alien: Resurrection may not have Scott's uncompromising claustrophobia, Cameron's relentless bombast or (what was left of) Fincher's primordial desolation, but it does have enough suave, attitude, and visual flair for three movies of its kind.

Notes on the Special Edition

I'm a sucker for Director's Cuts and various alternate versions of just about any movie in question - whether superior or inferior to their original versions, they provide us with an opportunity to see "what if," something I find invaluable when considering how much even the slightest change can alter the tone or intent of an entire film. In the case of Alien: Resurrection, Jean-Pierre Jeunet considers the theatrical release to be his Director's Cut (and rightly so, in my opinion), the new version assembled for the monolithic Alien Quadrilogy DVD box set standing as little more than a curiosity for fans. My hope is that a curiosity it will remain, it containing little more than the excess fat rightfully left on the cutting room floor, the majority of the new footage containing little more than throwaway dialogue - character interactions that, while not necassarily bad (although some of them certainly are), detract from the film's otherwise sleek efficiency. Otherwise, however, the most significant changes are the newfound bookends: a completely different opening credits sequence, initially abandoned due to a lack of special effects funding (thank goodness for that, seeing as it is possibly the worst sequence in any Alien film to date, AVP included), and an extended ending in which Ripley and Call share a conversation after having landed on earth. The latter is certainly the better of the two (the former, however, is more interesting), but I sense that none of the words spoken in this sequence really compliment what is otherwise expressed in the images of earth as seen in the original ending. When giving this DVD a spin, take the theatrical release any day of the week.
9 comments:

When it comes to Cameron's debut, I have no shame in being an unabashed fanboy. Yet this film - of which every frame, audio clip and line of dialogue is forever ingrained into the deepest recesses of my mind - took on a new place in the lexicon of cinema when I finally realized why the most famous image from the masterpiece Un Chien Andalou always felt so vaguely familiar...