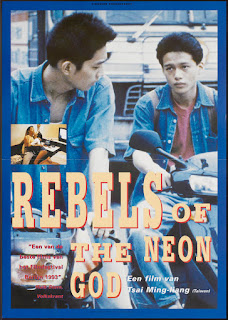 After the existentially fraught, almost magnificently crushing experience of Stray Dogs (released stateside last year), Tsai Ming-liang's debut feature, 1992's Rebels of the Neon God, feels positively mainstream. Never officially released in the United States before now, it's a remarkable film, not only for the fact that Tsai's use of composition and extended, languid takes was already formidable-bordering-on-consummate, but also for the rear view it offers into the west's own global effects, now presented not unlike something preserved in amber.

The neon god of the title refers to Nezha, a Chinese deity evoked explicitly by at least two characters, but more so does it refer to the cityscape habitat this film's small band of characters find themselves struggling vainly against, almost unaware. Two small-time thieves are our introduction to this world, as Ah Tze (Chen Chao-jung) and Ah Bing (Chang-bin Jen) break into a payphone and various other vending machines for the loose change waiting inside. One senses that their handiwork is less out of financial need than because they're feeding into their own projections of machismo; a telling moment occurs early in the film when Tze's girlfriend, Ah Kuei (Yu-Wen Wang), asks him after a night of drinking if they raped her, her tone equal parts casual and disturbed. Their story intertwines with that of Hsiao Kang (Lee Kang-sheng), a troubled student struggling to satisfy the wishes of his parents.

Rebels features many cameos by popular works of western cinema, from a poster of Rebel Without a Cause in the back of an arcade to an implied shout-out to Taxi Driver when one of the characters purchases a gun for some casual target practice.  These hallmarks are but a piece of the socio-cultural architecture that at once shapes and torments these characters, who spend most of their time laying down (not necessarily sleeping), or pleasuring themselves, and each other. A flooded apartment building suggests another metaphor for a roving, ill-defined existence within the film's larger microcosmic framework; sandals, cigarette butts, and other detritus is cast about as dirty water surges upward from the floor's intended drain, much like these characters have less autonomy than they realize within a society unable to quell its own moral plumbing.

Tsai's film is nothing if not a great expression of sadness and longing, particularly the kind so often impossible to articulate when one is in the midst of depression. Numerous details are left unexplored -- why Hsiao Kang's scooter is towed, for instance -- with the cumulative impact being that so much of life affects us without explanation, and maybe it's fruitless to dwell on those aspects. The minimalist story, such as it is, is tertiary to Rebels' lyrical and visual qualities. The acts of vandalism perpetrated by these characters seem minute compared to the larger dehumanization implicit in nearly every frame. An act of revenge instills one of these souls with a momentary catharsis, but the scenes proves melancholy, as the viewer knows better the fruitlessness of such deeds (see also: the wasted efforts to plug the aforementioned apartment drain). Rebels of the Neon God is one of the great films about modern unrest and the pangs of youth. I can't wait to watch it again.
No comments: