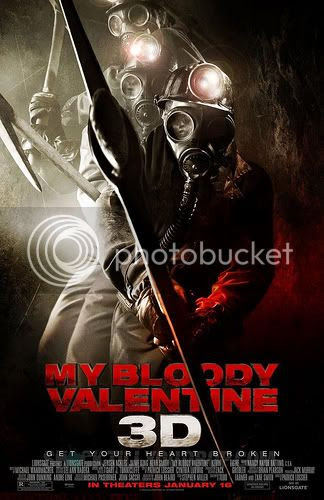 Though it stands as one of the better horror remakes to come along in recent memory, 2009’s My Bloody Valentine still only just passes for competent watchability. Though personally unfamiliar with the 1981 original, this conceptually faithful version boasts its own level of sporadically witty self-consciousness via a string of 3-D “gotcha!” moments (my recommendation for DVD viewing: screw the glasses and just watch the movie), renderings its angle as being just silly enough to tread self-parody. Would it have gone all the way and thrown in more distinctive commentary, this resourceful – however occasionally, perhaps deliberately stupid (specifically in the character department; everyone here falls down while running, too) – genre exercise might have been some kind of subversive classic. Instead, in primordially entertaining fashion, it hits all the marks at a healthy stride. An opening slasher spree gruesomely recalls Romero’s Day of the Dead (remember the severed upside down head?), while the central villain – a miner, gone berserk after a cave-in forced him to kill his fellows to conserve air, now possibly back from the dead – suggests Darth Vader’s kinky cousin. The first “kill” is delightfully abusive of the film’s 3-D making, and represents one of the few imaginative examples thereof. If anything, the film deserves to be longer and more exploratory than is ultimately allowed by the climax’s disingenuous contribution to the Donald Kaufman school of thought.
4 comments: 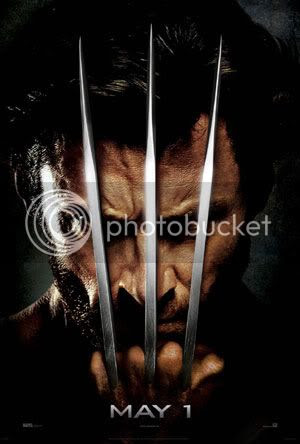 Purporting an adrenaline-fueled, kick-ass showcase in which the drive and torment behind the most interesting character of Brian Singer’s X-Men films is revealed, Wolverine – the first in a planned series of prequels – instead feels like a hunk of pasteurized cheese left on a summer day’s asphalt road. Far from the best of the recent superhero films – all of which worked to create their own singular mythology – Wolverine cribs from already recycled clichés and dictates meaning with an insufferable assurance bordering on pomposity. From the young Wolverine’s first bone-claw sprouting, oedipal-infused shout at the moon to the climax in which character motivations toggle like tools to the script, there’s nary a moment therein that doesn’t amount to a predigested void; watching it is like giving penance to a paint-by-numbers kit. Hugh Jackman, for all his impressive flair and brooding, is wasted on material so phoned-in; his iconic embodiment of the character is reduced to transparently badass drivel, while director Gavid Hood applies the same overly schematic storytelling and fakey visual textures that so permeated his prestige films Tsotsi and Rendition – both works of condescending moral inquisition aimed at highbrow guilt. Though his childish storytelling (not childlike; there’s a difference) is more at home in material with all the aspiration of a Happy Meal toy, it doesn’t make watching these barely-emotive action figures any more tolerable. For pure stupidity, nothing tops the scene in which a mutant falls at a descending rate so as to prolong the showing off of its long-since unimpressive superpower.
No comments: 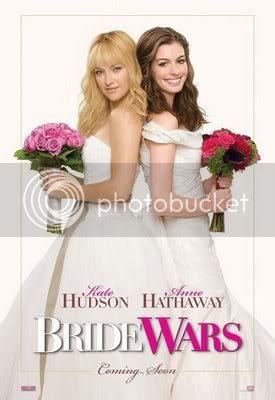 Psychosis reigns in Bride Wars, which should easily one-up any number of sub-par Disney films at the time-honored tradition of perverting the wordly expectations of countless impressionable young girls far and away from any that could be said to reflect reality. Somehow more disconcerting than the blind belief in happily ever after romances, however, is how this film reduces stereotyped cliches into supposedly real-world laughs for the grown-up market – what could be funnier than two best friends acting out of character (which is to say, like total morons) for ninety minutes? Very little, it seems, and so the story of two friends who turn on each other with bared teeth and poised nails when their respective dream weddings are accidentally scheduled on the same day (thus demanding one of them step down, a plot device that seems to have been dropped altogether by the halfway point) gets underway with leaden exposition and a drably unimaginative visual style enough to make one yearn for the comparatively rich complexity of Home Improvement. Narrated with fairy-tale oafishness by Candice Bergen as the elite wedding planner who oversees our two feisty protagonists purportedly epic battle, Bride Wars never challenges the regressive archetypes it swallows wholesale (unlike Legally Blonde, another died-in-the-wool XX title but one that genuinely empowered its pink-infatuated protagonist beyond her immediately superficial qualities), cynically milking laughs from a loveless marriage as if it were nothing more than a deformed sideshow display whilst tossing off lame references to homo and bisexuality with the same verve of a third grade class clown who revels in shouting random obscenities from the back of the classroom. Kate Hudson has long since lowered her standards, but it's hard to not feel bad for Anne Hathaway; in this or any other economic climate, Rachel Getting Married simply doesn't pay the bills.
2 comments: