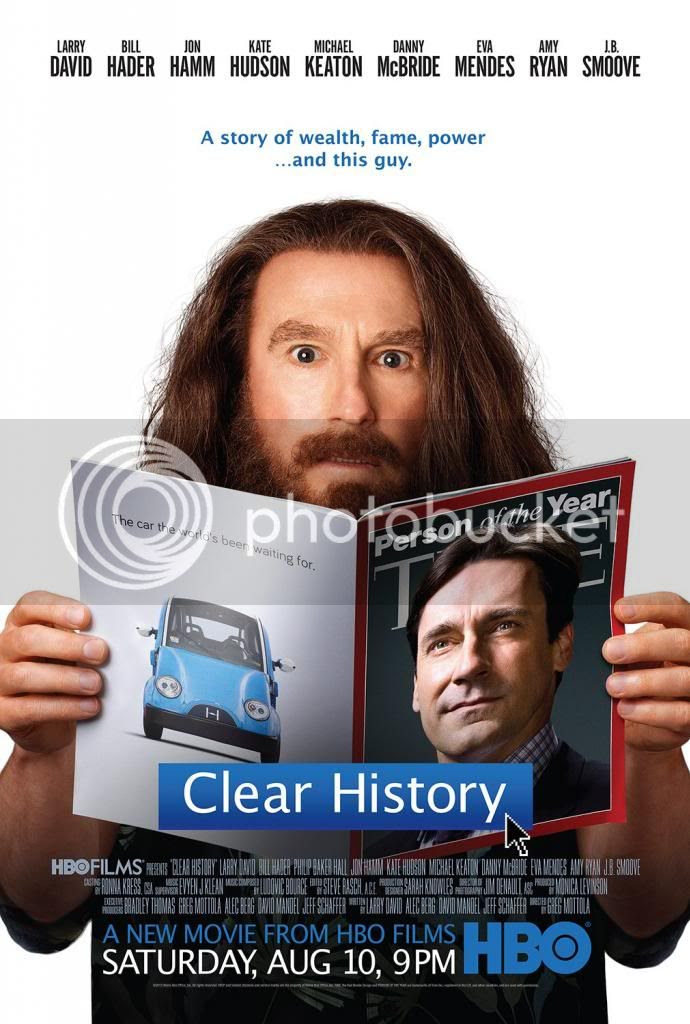 A stunningly unfunny comedy, Clear History's failure is all the more disheartening when one considers that it comes from the same minds that penned some of the finest episodes of both Curb Your Enthusiasm and Seinfeld. Nathan Flamm (Larry David, channeling his usual schtick) is an eccentric marketing executive with an upstart electric car company, but the name of their new product—“Howard,” inspired in part by the main character of Ayn Rand's "The Fountainhead"—is so off-putting to him that he sees no choice but to sell back his share of the company and disassociate himself completely, a decision that becomes the focus of public ridicule when the car proves to be a raging, billion-dollar success. Ten years later, Flamm is in hiding on Martha's Vineyard (where the populace, oblivious to his embarrassing and financially ruinous history, knows him as Rolly DaVore) when his former boss, Jon, (Will Haney), buys a local property.

This scenario might have sufficed for a half-hour episode of television, but at feature length, it's stretched past the breaking point, and it's one not helped by the script's tendency to pass over ripe comedic opportunities for those of the obvious and uninspired variety. Given the film's blatant attempts to capitalize on David's long history of playing a socially graceless narcissist (as indicated by the script's assortment of awkward personal encounters, unfortunate coincidences, and typically David-esque pet peeves), it's somewhat astonishing when, after the invocation of Ayn Rand, Flamm's anger over the name Howard is revealed as entirely apolitical, instead proving to be merely a curmudgeon's petty reaction to something new, an unsubstantiated idea necessitated by the script to justify all that follows. Such pettiness is on display throughout, from the predictably structured setups and payoffs of the plot's disparate threads to the tossed-off and callous nature of most of the jokes (a long-gestating gag concerning the weight of Eva Mendez's character, Jennifer, feels particularly cruel) to the almost complete absence of a world with rules and consequences. One of the strengths of Curb Your Enthusiasm was its creation of situations in which David's guilt or innocence was largely beside the point, and the hilarity of his existential frustration worked because of a distinct moral context that questioned the nature of justice. Clear History, by contrast, exists in an arbitrary moral void.

That David manages to score a few laughs throughout is a testament to his innate talent as a comedian, but the script's rehashing of situations, gags and personal hang-ups (some of them dating as far back as the Larry David persona's original incarnation in Seinfeld's George Costanza) to such diminishing returns suggests that a different kind of characterization was called for this time around. Ostensibly, we're supposed to be rooting for Flamm, and while many a successful dark comedy has put far more reprehensible characters in the role of protagonist, Clear History's shorthanded characterizations and ethical vacuum prove so flaccid that it fails even if one views it as a nihilistic statement. Among the largely wasted cast, only Michael Keaton, as a grizzly islander with an appetite for destruction, walks away with his dignity intact, while it's roundly embarrassing to see talent like Philip Baker Hall and J.B. Smoove spinning their tires. On top of it all, the film simply looks banal and dreary, another surprising disappointment given director Greg Mottola's usual flair for infusing life and energy into otherwise visually sparse locations. Clear History fulfills the mantra that Seinfeld cheekily embraced, i.e. it's a film about nothing. Enthusiasm, curbed.
5 comments: