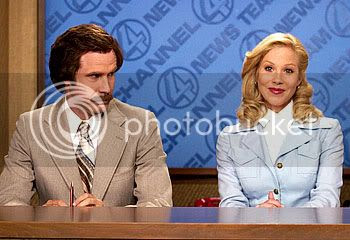 Anchorman: The Legend of Ron Burgundy (Adam McKay, 2004) Adam McKay's debut feature is a freewheeling ode to the scatological and puerile, and on those base terms, it's nearly perfect. Will Ferrell is the titular news anchor, an oafish personality equal parts confident, idiotic and adored (when found to be hitting on a girl unaware of his celebrity, he blabbers, eventually finding the words “I own many leather-bound books, and my apartment smells of rich mahogany”). Ferrell sells masculine insolence with Shakespearean conviction and something like gravitas; his minions – the overenthused jock Champ Kind (David Koechner), self-absorbed Brian Fantana (Paul Rudd) and mentally challenged Brick Tamland (Steve Carell) – round out the comedic archetypes. It's a great stupid comedy for smart people. Newcomer Veronica Corningstone (Christina Applegate) plays the straight man to their horseplay – it's the 70s and she's breaking ground as a female anchor – before subsiding to Burgundy's inexplicable charm. The film's riffing of the era is light and incidental; after the sublime skewering of media whoremongering (best rendered via the hilarious story of a pregnant panda), it's the shameless gender dynamics that receive the most time in the spotlight of this breezy palate-cleanser. Though never more than a romp, it's a hell of a good (and good-hearted) one. Quotability abounds, and Steve Carell steals the show; McKay knows how to use his actors. The PG-13 version is preferable; one "fuck" goes a long way. [Rating: 4 out of 5]

Resident Evil: Afterlife (Paul W.S. Anderson, 2010) While disappointing compared to director Anderson's previous picture - the borderline transcendent vision of colliding metal and flesh that was Death Race - Resident Evil: Afterlife nevertheless reveals itself as something of an heir to the anti-masterpiecedom of Plan 9 From Outer Space, Ed Wood's 1950s invasion saga being routinely named the worst movie ever made. Afterlife is more self-aware than Plan 9, which is expected for a film made in 3D (an almost sublime implementation, a rare success here for the format) but also necessary in justifying the singularly mindless forthrightness of the proceedings. It's drunk on overwrought visceral hooey and a near-total lack of concern for everything else. The fourth in the series, this music video/video game hybrid super-streamlines the narrative even at the expense of minor continuity (the DVD needs to come with a drinking game feature, do you hear me Sony?) to somewhat incredible effect (Afterlife is too smartly made to not be deliberately stupid). This retarded effect proves almost intoxicating amidst the chic gloss; the film is almost profoundly lightweight. Easily the best of the bunch, the postmodern Afterlife is close to great trash. [Rating: 3.5 out of 5]

The Town (Ben Affleck, 2010) There's no sophomore slump for Ben Affleck, who leaves a far more indelible mark on the crime genre here than in his wan, if thoughtful debut Gone Baby Gone. On paper, The Town is awash in clichés but they're pitched with real texture and pathos; you might not even notice. Affleck lends the material an everyday, everymanness without sacrificing artistry (on both sides of the camera; he plays the lead), and events unfold with graceful ease. As a friend closer than family to Affleck's Doug MacRay, Jeremy Renner is an utter chameleon as Bahstan hothead James Coughlin, a prison vet ready to put it all on the line again for the mandatory Last Big Score. An opening crawl informs us that this town has spawned more bank and armored car thieves than any other in the world. Cop and robber antics are presented as matter-of-fact, methodical, and often nasty (in both directions) so as to cut through the yellow tape; there may be no more chilling moment this year than when someone decides to look the other way (and nor do we blame them). A centerpiece heist holds a candle to Michael Mann's Heat. The cast is uniformly game, restrained, earthy, and will probably prove superior to at least half of those nominated for Oscars next year. [Rating: 4 out of 5]

Oceans (Jacques Perrin and Jacques Cluzaud, 2009) Oceans is fine in its stateside, theatrically-released form, with a voiceover by Pierce Brosnan that's notable for achieving Disneyland tactfulness without actually triggering the gag reflex. Nevertheless, in literalizing so much of what's onscreen, this verbal narrative can't help but detract from the awe-inspiring images. If possible for yourself, I say it's preferable to watch the film with an alternate language track sans subtitles; the DVD and Blu-ray releases offer English, Spanish and French language tracks, so assuming you're not trilingual, go for it). A success in purely visual storytelling, Oceans somehow squashes the largest ecosystem on Earth into Happy Meal form while still maintaining a sense of wonder. Jaw-dropping images aplenty; a sequence in which birds and dolphins feast on a school of fish must be seen to be believed, while a humorous scuffle between a shrimp and lobster is better than anything in Iron Man 2. Compactly profound, appropriately humbling, and this is just the tip of the iceberg. [Rating: 4 out of 5]

Easy A (Will Gluck, 2010) Forgive me for this: Easy A gets a B for effort but it's really C grade material. Critically thoughtful but only almost subversive, this star vehicle for the badass beauty that is Emma Stone looks at the social mechanics of peer pressure and rumor corrosion but never really fully considers them; it's Daria, de-fanged. Straddling an uneasy line between caricature and satire, Will Gluck's follow-up to Fired Up! (making this probably the film improvement of the year) chronicles the domino effect that ensues when 17-year-old Olive (Stone) agrees to “date” her gay friend so as to alleviate his everyday difficulties in a homophobic environment: he compensates her financially, and she agrees to a public stunt and the allowance of subsequent gossip. Soon, a business is established: Anyone in need of faux sex status is a welcome customer to the socially defiant, steadfastly virginal renegade. Certainly better than your average piece of American Pie backwash, Easy A still panders to the knee-jerk crowd it aims to be so critical of, wasting its not insubstantial comedic energy on pedestrian histrionics and, at a few moments, proving downright infuriating in its handling of the material. (Inconsistent with the thoughtful Olive’s personality is her having to re-read “The Scarlet Letter” for basics anyone could have gathered from a review pamphlet.) Eventually, lessons are learned and happily ever after ensues. Competent direction only almost compensates for the half-baked script; Stone elevates the material to the near sublime in its best moments. [Rating: 3 out of 5]

The Girl With the Dragon Tattoo (Niels Arden Oplev, 2009) As a page-turner, this is understandably – maybe even defensibly – hot shit. But on the basis of the much-lauded roll of celluloid posing as an actual movie known as The Girl With the Dragon Tattoo, this solemn soap opera wank job already stands a chance at the title of Skankiest Film of the Decade. It plays like TV, but it's awful however you cut it. The whodunit, gender-conscious plot is beside the point; the talent of the performers seems drawn into a black hole, equal parts lurid sensation and gutless titillation. But it's not even enjoyable trash; it's witless, suit-and-tie porn posing as Great Art. That David Fincher is attached to the American remake is fitting for material that suggests a wannabe Seven in Da Vinci Code robes of nothingness. [Rating: 1 out of 5]

Scott Pilgrim vs. the World (Edgar Wright, 2010) This intoxicating contraption approaches one-of-a-kind wonder but drops the ball pretty much instantly; how did this overburdened and confused script make its way to production? Edgar Wright's ode to videogame adoration and unrequited teenage love has enough conceptual vigor and idiosyncratic awesomeness for three movies, but most of that kinetic energy fizzles when the deadweight annoyance that is the titular characters girlfriend Knives (Ellen Wong) is either onscreen or guiding the action (read: most of the time). Pivoting primarily on Scott's (Michael Cera) longing for the elusive punk princess Ramona (Mary Elizabeth Winstead), Pilgrim's decision to complicate his head-over-heels attraction with issues of emotional codependency and infidelity renders what should have been an expressionistic act of postmodern genius as something akin to a bad high school soap opera. Scott's issues stop inviting pity and start inviting scorn; unrectified, they just sit there, while the nails-on-chalkboard Knives further suffers as the most developed character of the lot (she's too grounded here to act as a mere point of flagellation; on the manga page the film was adapted from, she probably has more room to breath). The high points – the opening credits, Scott's various CG-tinged "battles" with Ramona's former boyfriends, and other sequences host to Wright's tripped-out, button-mashing embellishments – are worth the slog, but it essentially amounts to a case of what could have been. [Rating: 3 out of 5]
9 comments: