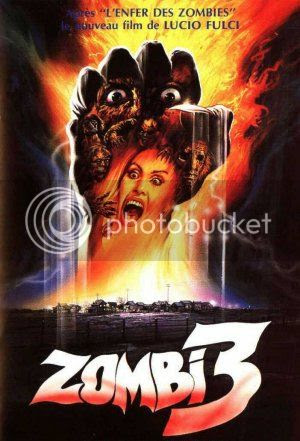 Lucio Fucli’s long-delayed, sequel-in-name-only Zombi 3 is not without its joys, but the film, sadly, never reaches the same depths of poor taste that made Zombi 2 (a film I initially hated before developing a palate for such bottom-of-the-barrel B-movie fare) such a wretchedly good time. Whereas the first unofficial sequel to Romero’s Dawn of the Dead (released under the moniker Zombi in Fulci’s homeland) shunned character, logic, and even narrative cohesion for the sake of stunning makeup work and revolutionary zombie action (three words: zombie versus shark), Zombi 3 spends more than half of its running time going through rudimentary plot tactics, rendering its grindhouse goodies nearly stale by the time it gets around to them. That being said, the grisly camerawork (often changing stocks within a single scene) and deliriously bad acting (complimented further by barely decipherable vocal dubbing) give the film something of an otherworldly vigor, no matter how ridiculous its relentlessly popping-up zombies become by the end. Here, the undead foreshadow those in Danny Boyle’s genre-reinventing 28 Days Later...; infected by a radioactive and mutated virus, the living become berserk monsters who not only eat human flesh, but attack with maniacal persistence. That all of this is practically unwatchable is a given and should only be approached by seasoned veterans of bad taste, for whom a handful of completely illogical (but startlingly effective) scares and all-out ridiculous zombie attacks will redeem the proceedings, if only just. Among them, a piss-your-pants hilarious bird attack and a sequence that should have (by all means) provided the film with its title: Attack of the Flying Disembodied Head!