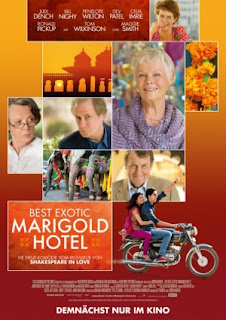 If I had reviewed The Best Exotic Marigold Hotel after my first viewing of the film, it'd have been mostly a hostile defense against the audience with which I experienced it. The good-natured charms of seeing the uprooted elderly as if they young again were rendered insufferable in the midst of an audience that was likely 2/3 homophobic (judging from what they laughed at, and how), and a streamlined interpretation of a Robert Altman web of characters didn’t help matters to say the least. Shaking the experience off, I later found an admittedly somewhat glib but infectiously earnest crowd-pleaser about the virtues of acceptance, getting old and acting on the impulses of love. Sincerity and heart overcome the film’s generally wanting artistry (John Madden seems to work well with actors, but I can’t help but wonder about his competence elsewhere), and if it’s portrayal of indigenous archetypes is seen as more widely offensive than this relatively privileged white guy is capable of discerning, I would offer as evidence to an absence of malice the frequency with which the script reinforces the notion that it’s the foreigners who are out of line, despite how frustrating it is to see the talented Dev Patel straining against the chains of typecasting. The sunshiny screenplay is tidier than this kind of wide-net storytelling can usually get away with, but then, rare is the film that manages the same with horny, dancing old men. The cast (a virtually greatest hits of modern British talent) elevates the proceedings more than they likely deserve, but even at its most arm-twistingly obvious, The Best Exotic Marigold Hotel ultimately ended up leaving me somewhere close to smitten. It’s affecting, like something you can cuddle up to, even if you forget all about it later on.
1 comment: