1. It is with crystalline clarity and unprecedented emotional poignancy that Kelly Reichardt explores life off the grid in Wendy and Lucy, a heartbreaking, life-affirming tone poem in which sacrifice and good intent are next to worthless in a world where the dollar reigns supreme, consumers are more highly valued than people, and poverty sickens the very well of society's soul.

2. Behold every breathtakingly rendered frame of the deliriously conceived Speed Racer, the Wachowski Brothers' defiant foray into computerized cinema in which every exquisite editing device serves to bridge the past and present, channeling the archetypal beauty of youth's creative ambitions, subverting corporate greed (both literally and figuratively), and bringing dreams of destiny to life in a ravishing pseudo-reality.

3. At once coolly assured, technically masterful and structurally unsound, The Curious Case of Benjamin Button proves both enrapturing and inescapably flawed as David Fincher charts the inescapable nature of life with surgical precision and a wrenching clarity that, ultimately, seems altogether limitless in its emotional capacities.

4. A cinematic capsule for our times doubles as a poetic antidote to national (and worldly) anguish in Jonathan Demme's Rachel Getting Married, in which all of society's petty categorizations (race, religion, gender, etc.) collapse to reveal a collectively beating, wounded, healing, loving heart that wants only the strength to carry on for another day.

5. Not only a stellar achievement in animation but a landmark for cinema entire, WALL·E distills visual languages as far ranging as those of Charlie Chaplin and Stanley Kubrick into a cohesive, seamless whole, its environmental timeliness surpassed only by its insight into the perseverance of the human spirit and the nature of the soul.

7. Oliver Stone the gadfly takes a backseat to Stone the humanitarian in W., here bypassing easy criticism for a wiser approach, re-contextualizing the persona of George W. Bush from that of a national buffoon into a modern day Greek tragedy and implicitly reminding us of our collective responsibility in the ongoing forging of history.

8. By far the most poetic film of the series, Indiana Jones and the Kingdom of the Crystal Skull may also be the most artful genre work of its kind. Shunning all manner of expectation and pretense, Spielberg earnestly emphasizes the intimate and emotional with wit and grace to spare, to say nothing of his imaginatively thrilling set pieces.

9. The debut feature of the year, Joachim Trier's sonically overloading Reprise fuses character, narrative, and a distinctly unique stylistic voice with effortlessly assurance, poignantly evoking the life-crushing burden of the tormented creative spirit and announcing a major new influence on the independent circuit to boot.

10. A greatest hits package of sorts for the indie auteur, Gus Van Sant's Paranoid Park utilizes an army of aesthetic components to forge an intoxicating representation of the teenage headspace's wandering spirit, evoking an intimate diary of the soul in the process. 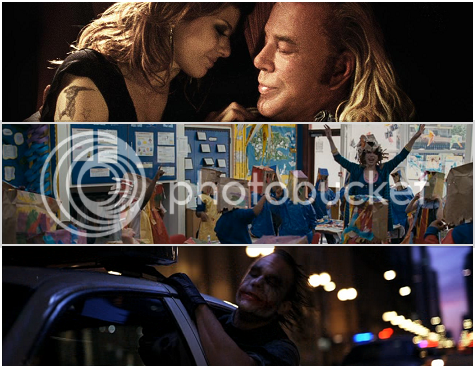 Boarding Gate, The Wrestler, Happy-Go-Lucky, Married Life, Flight of the Red Balloon, The Duchess of Langeais, Generation Kill, Dear Zachary: A Letter to a Son About His Father, The Dark Knight, Hellboy II: The Golden Army