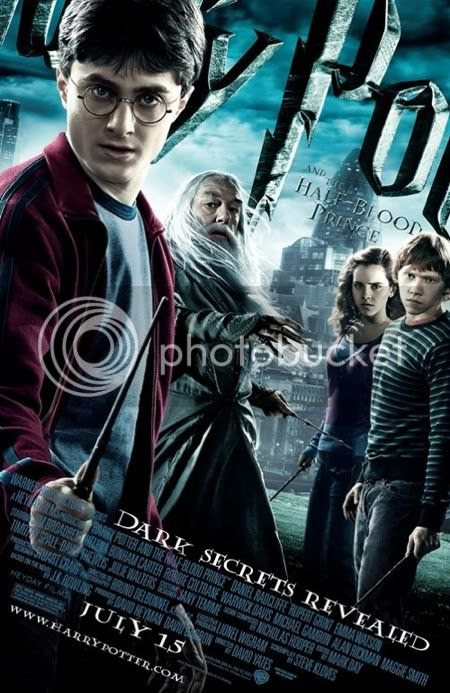 Harry Potter films - such as they must exist, given their tentpole status for Warner Brothers - seem to require certain concessions from everyone outside the core target of Fans of the Books. Rather than attempting immersion on purely cinematic levels, a consideration of these films seems fair only when hinged on such "under the circumstances" attributes; only the bold Alfonso Cuaron totally broke free from studio oversight (or at least felt like he did) in Prisoner of Azkaban, the third film. Now three films worth of aesthetic recoil later, The Half-Blood Prince comes to us encumbered by similar issues of narrative balance as the majority of its predecessors - what matters to making this a good film versus what matters in selling this to a zealot-like audience? Personally, I prefer coming to these films as I always have - fan of the books, but with only faint memories of reading them (I've only read the first more than once). Tellingly, the best of the films have been those that made me feel least like I was re-reading their source material on the screen, and so I found Prince's almost whispy, broad-stroke handling of the plot more satisfying in the manner of pure cinema than that of a tedious connecting of the dots. Not every decision made in streamlining this story was wise, however - the climax is foreshadowed for virtually the entire film, first breathtakingly subtle (in an opening pre-title scene with Harry and Dumbledore) , but only to go directly into thuddening blatancy. Visual and verbal wit reigns as the special of the day, however (yes, this is how some high schoolers talk), while thoughtful compositions, in their vast, almost embracing depth, suggest a silent film made today. The effects are less annoyingly attention-grabbing than I'd come to anticipate - instead, they're more texturally banal so as to ground the proceedings in a believable habitat in which magic is a simple fact of life (as opposed to a box office draw). Were the film more consistently awe-inspiring (a madhouse chase through a wheat field suggests the Days of Heaven climax by way of Lynch), or the cast but a sliver more emotionally game (while quite honed and precise in their ever-deepening displays, these veterans nevertheless seem a little tired, even if such is otherwise appropriate given the long-term status of their characters' plights), and this might have been the most sterling Potter entry to date. Such as it is at first glance, it comes close.