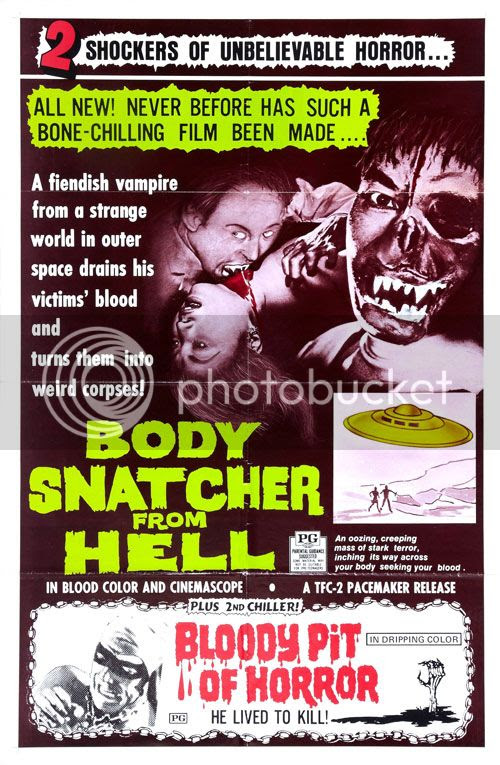 It seems impossible to not mention the similarity between Goke, the Body Snatcher and the same year's Night of the Living Dead. Both are quasi-science fiction/horror films about, among other things: a small band of people trying to survive, interplanetary happenings, racial politics, humanoid monsters that devour their victims in whole or part, and a conclusion that doesn't aim to have you skipping out of the theater. In it's own way, Goke is just as brilliant, beautiful, and entertaining as Romero's first zombie masterpiece. Here, it's a flight of passengers that crash lands on a remote island, after sighting a UFO. Divulging further details would be criminal.

Visually, Goke is almost an inversion of Night's impressionistic black and white imagery; the widescreen Fujicolor images burst with hypnotic splendor, suggesting nightmares remembered with all the exuberance of a kid in a neon-colored candy store. The opening setpiece is a hard achievement to top, yet the film continues to outdo itself, barreling through character drama and dreamy monster menaces with a remarkably elastic sleight of hand. As archetypes, the broad-stroke characters fit the B-movie bill snugly, not that it matters in the bitter end. Already a great achievement, Goke fully commits to the course of its vision, and the end result is something at once savagely beautiful and sure to have caused many nightmares in those whose young eyes saw it.