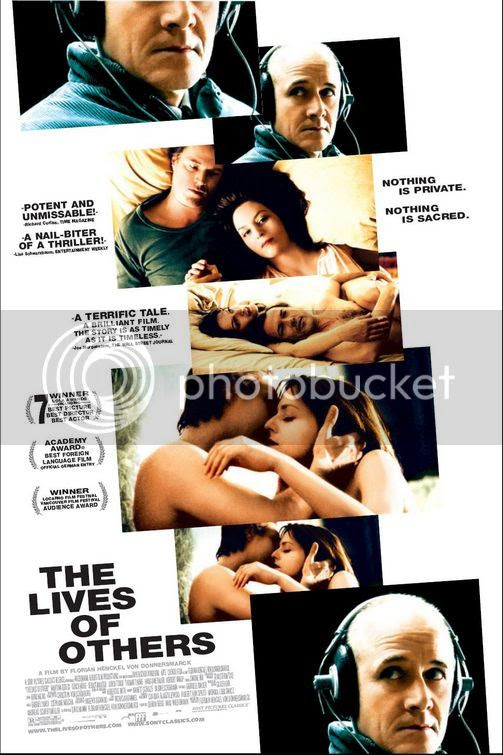 The Lives of Others aims to flatter its audience – a quality typical for a film whose emotional posturing is only skin deep. Well meaning though it is, Florian Henckel von Donnersmarck’s Oscar-winner compulsively hand-holds the viewer through a guided history tour of 80’s East Germany, where the oppressive government has made it its goal “to know everything” and even the slightest of dissenters are subjected to endless interrogations and customized forms of psychological torture. Gerd Wiesler (Ulrich Mühe) is an example-setting Stasi office: by the book, firm, consistent, and unforgiving. However, his monitoring of a suspected playwright (Sebastian Koch) and his girlfriend (Martina Gedeck ) begins to erode his rigid exterior, as he sees the human cost levied by the system he has so firmly supported. Mühe’s performance is a fine one but the part aches for dimension; such as it is, the ambiguous motivation of his swaying allegiance isn’t so much rooted in a sense of implicit humanity as it is a mere plot gimmick needed to achieve the film’s sermonizing goals. Both Wiesler’s character and the bulk of the plot are painted in little more than the broadest of strokes, thus freeing the audience from having to truly come to terms with the social-political conflicts at the film’s center. Spielberg’s Schindler’s List is overrated but the film probes its material beyond our day-to-day notions of good and bad, a necessity in coming to terms with the role of evil in our world. Aesthetically and historically, though, The Lives of Others is pure vanilla – Donnersmarck presents us with a potentially thrilling plot but virtually all the emotional strings have been detached, instead opting to spell out its central conflicts for us in condescending expositional form, all the way through the disastrous, intolerably force-fed coda. Such is only exacerbated by Hagen Bogdanski’s point-and-shoot cinematography, suffocatingly blocked and hermetically sealing any emotional rawness beneath the film’s style-free highbrow exterior. There’s no change of mood, no shift of tone throughout; the film wants to offend no one, and in doing so has totally deprived itself of personality or feeling (one scene in particular, in which a moment of great tragedy transpires, unfolds so plainly that it suggests a botched Three Stooges gag). The film’s success over Pan’s Labyrinth at the 2007 Oscars is obvious in retrospect, less because of its historical subject matter than it’s total lack of stylistic intrigue – its pandering dryness self-righteously masquerades as highbrow importance. The film isn’t as hysterical as The Sea Inside, another recent Foreign Language winner, yet it remains an unfortunate reminder of the Academy’s oft-gutless elitism.