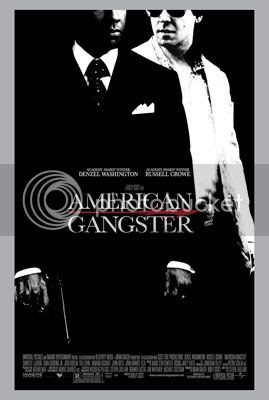 American Gangster shares more than a passing structural resemblance with Malcolm X, another epic length Denzel Washington headliner. Like Spike Lee's hugely ambitious biography, Ridley Scott's much lavished period piece is a work that - like its antagonistic main character - wants it all, only to get very little in the end. The film is impressive only in technical, superficial ways; the recreations of 1970's Vietnam and New York City never want for believability but the whole of Scott's undertaking threatens to topple over from the sheer narrative and stylistic unruliness of it all. In an attempt at self-validation, the film proudly states its based-on-a-true-story status right out of the gate, only for the following 150 minutes to suggest a pretentious, all too self-conscious attempt at one-upping the cinematic mythology of Scarface and Heat all rolled into one. Denzel Washington is Frank Lucas, an NYC-based heroine dealer who upsets the market when he decides to eliminate the middleman from his business, traveling to the Vietnam jungles in person to acquire the raw goods, untouched and undiluted. Flipside is Russel Crowe's do-good narcotics cop Richie Roberts, who struggles to remain straight amidst both a crooked police force and the strains of an ensuing child custody battle. American Gangster explores the labyrinthine connections - personal, political, professional - that connect these two individuals in their respective paths, with Roberts looking to bust Lucas and the many (both criminals and cops) to whom he bears ties, but its expositional meanderings never rise above a sense of both tedium and emptiness. Scott seems convinced of his material's irrevocable importance, an angle that dogs every pseudo-pretentious swipe at elevating such into the realm of American myth. American Gangster loads up the screen with all the goods from any Grand Theft Auto game but it fails to find any deeper meaning, relevance, or even excitement amidst it all; it would be unfair to compare the film to Scarface (their stylistic aims are on opposing ends of the spectrum), but one can't help but think of Brian De Palma's great work of pop art during American Gangster's more testing stretches. Perhaps most disappointing, though, is Washington himself, who, while masterful even during Malcolm X's most overbearing moments of indulgence, brings next to nothing to his character here aside from that required by the script - basically, a lot of faux-macho, gentlemanly posturing punctuated by angry staring, shouting, and brow-furrowing. (Frank Lucas is angry. You won't like him when he's angry.) Crowe isn't much better off, although given the skimpy material at hand it's difficult to blame either actor. The film's best scene, then, comes when the two confront each other one-on-one. Its quality could be the result of the two actors finally being allowed to play off one another, or it could be the fact that it comes near the tail-end of this lifeless stretch of empty craftsmanship. Take your pick.