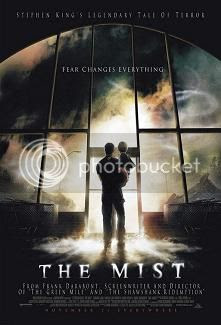 If I may risk incurring the wrath of countless Shawshank lovers everywhere: The Mist is the best of Frank Darabont's three Stephen King adaptations to date. Although myself unfamiliar with the source material in each of these cases, the reason for this has less to do with the abrupt change in genre than with The Mist's relatively minimalist plot, one focusing more on the behavior of a particularly epoch of humanity than on larger dramatics and thus less likely to attract the kind of superficial, syrupy direction that rendered the director's preceding works so vanilla in their effect. The Mist uses similar touches but to appropriately B movie effect; although only incidentally similar to John Carpenter's underrated The Fog, the film knows its influences, homaging the director in an early reference to his own remake of The Thing. After a torrential thunderstorm the likes of which is rarely seen, a small, seemingly typical American town is cut off from its basic utilities. David Drayton (Thomas Jane) and his son Billy (Nathan Gamble) travel to the local supermarket to pick up food and supplies, and it is during that a strange mist engulfs the town, reducing visibility to near zero and bringing with it a substantial level of dread. A bloody man runs into the store as the fog encroaches screaming of "something in the mist," and one customer who attempts to flee via his parked car can be heard screaming in the distance. After a back-room encounter with monstrous tentacles that kills one of the employees (an event seen by only a handful of people), the refugees slowly split into three factions: those who believe nothing is truly wrong, those who know something monstrous - even supernatural - lurks beyond their vision, and those who believe the mist is the wrath of God upon them, the final judgment day.

Although likely to appeal more to some than others based purely on their ideological particulars, King's nihilistic tale of how people respond to one another after the safeguards of society have been removed is alternately appropriate and disheartening in its nihilism, the former for its accuracy and the latter for its repeated use of shortcuts to make its points. As the totally bonkers Mrs. Carmody, Marcia Gay Harden lends enough conviction to the religious zealot to make the character believable in the moment, if only just; her hatred-in-the-name-of-love self-righteousness so one-note and extreme that it exists less as a character trait than as a plot justification. Fortunately, then, the film makes up for its sometimes-skimpy allegory with all-and-all physical terror, transcending traditional B movie trappings in its presentation of its various creepy-crawly monstrosities as a literal plague. The special effects are wanting in only a technical sense, their kinda-cheesy guilelessness making them something of a modern equivalent to King Kong: easy to dismiss at first but downright terrifying if you buy into their charms. Darabont showcases the film's horrific elements not with any sort of traditional build-up and climax, but with a more casual sense of montaged unease, with scoreless sequences of many things happening at once, none of them pleasant and most of them downright terrifying for the squeamish (one moment in particular - in which a seemingly tiny insect reveals its true size - momentarily induced me with something akin to turrets syndrome, much to the amusement of my surrounding audience). The Mist culminates with a harrowing look at what may as well be the end of the world - entrenched in the titular smoke, it's as if the surviving characters have found their way to heaven only to discover it a hell in sheep's clothing - and though one gets the sense that it may be taking the path of nihilism purely for the sake of wrenching our guts into a knot, its effectiveness is altogether impossible to shake.