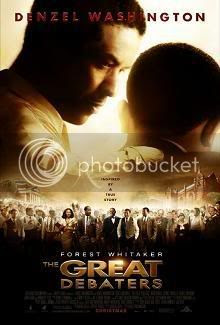 The latest history lesson brought to you courtesy of Oprah Winfrey, The Great Debaters flails about in its attempts to portray both genuine human behavior as it exists at a historical crossroad as well as events meant to uplift, any sense of emotion or truth sapped dry from the proceedings by an all-encompassing sense of not only fatalistic obviousness, but also plain old lazy storytelling. This week's tutorial provides us with another example of How to Get the Man's Foot Outta Your Ass, focusing on the 1935 African-American Wiley College of Texas, whose tremendously successful debate team went on to debate Harvard University in an historic showdown of class and race, despite the expected opposition from bigots as well as the brouhaha that occurred following their teacher Mel Tolson's (Denzel Washington) blacklisting as a social activist. Director/star Washington waxes this homogenized account of history—seriously, lynching never felt so weightless as it is portrayed here—with bland competence, more intent on tried-and-true methods of obvious cut-and-paste storytelling than examining the complex social turmoil of the time in ways not easily summed up in quotable and over-written speeches ("The time for justice is always right now!"), sacrificing lived-in truth for compact moralizing. It isn't cinema so much as inane historical recreation given narrative form, its unveiling more akin to textbook notes than spontaneous human behavior (seriously, Killer of Sheep finally gets an official release and this is what gets nominated for awards?). As is typical of such fare, the primary goals are commendable for their well-intentioned earnestness, but zero points for such gluttonous condescension.