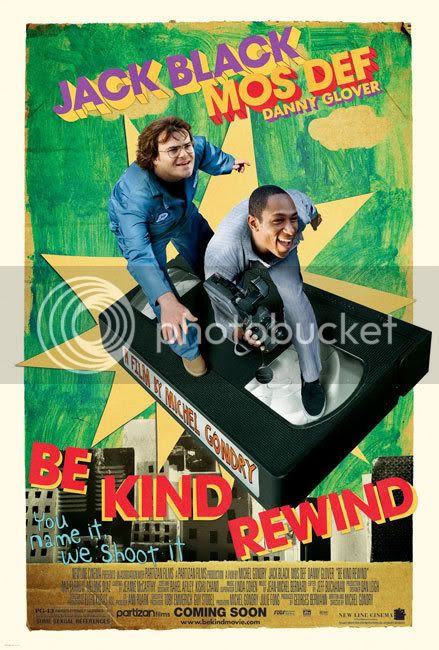 There's one area in which you can't fault Michel Gondry's Be Kind Rewind, and that's in its esteemed and unwavering nostalgia for the video format alluded to in its fitting titular rhyme. Pity, then, that the video cassettes, like much else in this feature, are merely incidental elements in what amounts to the most traditional (read: predictable) narrative surrealistic wunderkind Michel Gondry has yet committed to the screen. After the conspiracy-obsessed Jerry (Jack Black) inadvertently destroys the entirety of a local video store's rental product, he and Mos Def's Mike (who is maintaining the store while Danny Glover's owner is away) must act fast to replace the antiquated products. Impending circumstances disallow them from doing the obvious (which would be replenishing their entire store product via eBay for about $10), and with the clock ticking they shoot and edit their own version of Ghostbusters for an important customer who's never seen the film before. Condensed moments such as these (Jack Black's interpretation of the Ghostbusters theme song has classic written all over it) instill the film with sporadic comedic brilliance, and while Gondry is no less assured in his tactics amidst such relatively normal material, his capabilities (and lack thereof) become apparent in this film's markedly different emotional tones. After Jerry and Mike's homemade movies become an unprecedented local hit (their reclusive New Jersey store drawing customers all the way from New York City), the cash starts rolling in like never before, but will it be enough to save the business in time? The bittersweet taste of the new paving over the old is indelible in the film's assessment of everything from how we consume our art to how we interpret history into our own lives, and Gondry understands the unifying power of creation that stands at the center of any community worth being a part of. Pity, then, that Be Kind Rewind ultimately trades in schmaltz of the unearned kind, laying it on so thick in the final act that it effectively smothers out the underdog virtues of its all-too endearing protagonists.