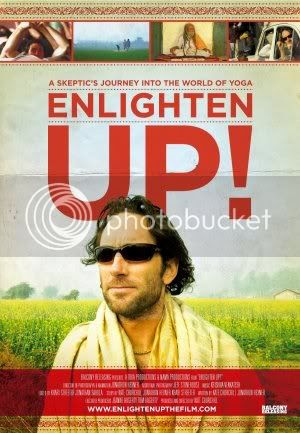 Less an observe-and-report documentary than a social experiment rendered via film, Enlighten Up! tracks the progress of a selected individual as they are introduced to a lifestyle of yoga over the course of several months, so as to see if someone unfamiliar with the practice can achieve a more peaceful or heightened state of mind as a result. For her guinea pig, long-time documentarian Kate Churchill chose Nick Rosen, a New York-based journalist and a general agnostic more comfortable with hard facts and observable details than the professions of others or vague ideas of faith. Though an opening montage of talking head interviews seems to suggest a tweet work of opinionated editorializing, Enlighten Up! quickly proves to be an edifying work of exploratory filmmaking, limited only by the lengths to which its maker and subject are willing to stretch themselves. Immediately, Nick is thrust into some half dozen different forms of yoga, each with their own emphases and philosophies; whereas some focus purely on the physical workout endured via the asanas (yoga poses), other, more purportedly pure forms of yoga all but totally dispense of the physical experience altogether. Ultimately, the film comes to be less about its physical subject than its greater social and spiritual connotations, as Nick travels throughout the United States and abroad seeking out the wisdom of those who have dedicated there life to greater enlightenment via the self-betterment of their respective yoga traditions. Behind the camera, Churchill develops a dramatically healthy tension with her subject - who at times resents her control over his life (at one point the two stop speaking altogether until Nick is granted a long-awaited night off for socializing) - and one that eventually bounces back onto Kate in unexpected ways before revealing quieter, deeper truths behind the surface. Gracefully shot and edited without the clumsy manipulation often prevalent in such independent fare, Enlighten Up! proves a modest look at the search for truth, and the self-evident meaning therein.