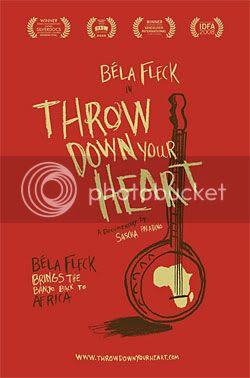 Throw Down Your Heart knows it isn’t approaching any be-all end-alls within the documentary realm, and so it is a film infinitely better than it otherwise might be when it knowingly and unbegrudgingly hands itself over to the music of its chosen subjects. As it follows American banjo maestro Bela Fleck in his travels of Africa in a stated attempt to bring the instrument back to its homeland, this able and culturally immersive documentary focuses less on the political and social plights of the people and lands visited than it does the escape provided by musical culture and the history recorded in it, giving way to countless instrumental tangents shared between Fleck and the African masters he’s sought-out in hopes of recording an album. The musical sets indulged therein sometimes rival Jonathan Demme’s Neil Young: Heart of Gold for sheer infectiousness, montaged with an emphasis on musical rhythms over visual logistics. More so than many acts of soapbox grandstanding, it tells us about the worries, woes, and joys of (an)other people, collapsing borders with the ease of a hurricane’s gust.