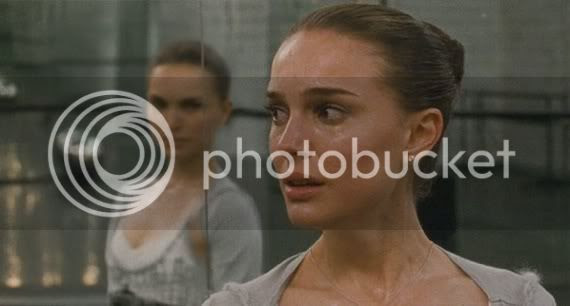 Black Swan (Darren Aronofsky, 2010) Clearly the work of a talent, Black Swan is also indicative of Darren Aronofsky's creative weaknesses as a filmmaker – shortcomings, mind you, that he has largely avoided, or put to good use, in all of his previous films. But this tale of Nina Sayers (Natalie Portman), an obsessive, self-destructive dancer intent on landing the lead role in the titular play, feels more like a deliberate stylistic exercise than a legitimate act of creation: it invites the common criticism that Aronofsky's style is technically proficient but soulless. The gonzo visual design – grainy handheld camerawork, desaturated colors, and a frequently implemented rotation shot that suggests an inverted fish-eyed lens – is ultimately one lacking much in the way of genuine subtext. What you see is what you get, and pretty as everything is, nothing is allowed to simmer long enough to accrue much meaning or verve – it doesn't even invite comparative thoughts of Aronofsky's own obsessive creative processes. It would be unfair to bring up Mulholland Dr. for comparison, but even unto itself, Black Swan's purported mindfuck is exceedingly low on legitimate crazies (I'm looking at you, derivative mirror freak-outs, here a totally wasted sight gag), and with credibility-stretching gotcha! moments peppered throughout like half-hearted Polanski shout-outs, only sporadically does it manage to rise above a connect-the-dots Pysch 101 thesis programmed with base stimuli. Clint Mansell's score propels Nina's psycho-sexual breakdown with ravenous thrust, but the screenplay by Mark Heyman, Andres Heinz and John McLaughlin (commissioned by Aronofsky, who worked on several versions of it over the past decade) grounds things in an embarrassingly creaky psycho-mother device. Everything comes out too neat and tidy to court true madness: a few scenes added or a few scenes removed would likely be a step in the right direction, just to take off the Pavlovian edge. Aronofsky's fingerprints make this worthwhile for his fans, but his connection to the material seems more professional than personal – he fails to make us feel why. Portman is fearless and grounded; even Barbra Hershey, whose part, as Nina's controlling mother, is a thankless rut, manages something in the way of characterization (her nuance makes the script's two-dimensionality hurt). The finale – sharp, unapologetic, and something close to schizoid – is inspired, and, like a handful of other sequences, worth rooting around for. But the film entire doesn't earn it. [Rating: 3.5 out of 5]

Let Me In (Matt Reeves, 2010) Let the Right One In gets something of a tonal inversion in the remake Let Me In, a triumph of imaginative, intelligent adaptation and breathtakingly assured direction; it joins Werner Herzog's Nosferatu and David Cronenberg's The Fly as one of the greatest horror movie remakes. It might even be better than Thomas Alfredson's excellent 2008 original (as singular as any vampire film); each is now better for the other having existed, too. The template is the same: Abby (Chloe Grace Moretz) is a normal 12-year-old girl in appearance, but has been so for many years as a vampire (blood, good; normal food, bad; daylight, very bad); she has a human partner of sorts (Richard Jenkins) who aids in the necessary killings to gather her required food. They've just moved into the same apartment complex as Owen (Kodi Smit-McPhee), an actual 12-year-old staying with his mother during a heated divorce and frequent target of bullies at school. The two loners first meet in the courtyard; what develops bears a certain childhood-pure love that frequently touches profundity. Whereas Let the Right One In was cold, transient and light on action, Let Me In basks in a glow of circa-1982 Spielberg nostalgia. Changes from the original script are light (a botched murder attempt is reworked here in a boffo car sequence), so what you're getting is something not unlike the same song from a different instrument. The director, Matt Reeves (of the good-but-not-great Cloverfield), displays heretofore unseen levels of talent; the veteran and child actors are entirely excellent, tragic, and heartbreaking. Let the Right One In may be the better film, but I think I prefer the B-side. [Rating: 4 out of 5] (both)

Casino Jack (George Hickenlooper, 2010) Purporting subversion via its plots indictment of corrupt financial establishments, the social timeliness of Casino Jack nevertheless proves unable to transcend crutch-bearing lip service to an undemanding middlebrow taste (the opening “based on a true story” tag is the first tell). Angry but ultimately aimless, it embodies the apathy of all those bad liberals who talk about how terrible things are and continue about their day. Chronicling the events leading up to the conviction of former “superlobbyist” Jack Abramoff (Kevin Spacey), the implied critique of lobbying – the means by which cash is permitted to influence votes in Congress – is one-note and, unless you've been living under a rock for the past few years, far from revelatory and quite tame where it intends to infuriate. The script, by Norman Snider, is too reliant on Abramoff as a relatable surrogate to genuinely scrutinize him and his behavior – he stays warm and fuzzy compared to the reptile he should be – and although Spacey is fine to watch, he can't elevate a whitewashed script and insufficient character material. The film itself feels dispirited, all action and no thought. A handful of framing devices are the only memorable bits; Casino Jack never elevates itself above the ideologically confused and comedically lukewarm (Jon Lovitz is wasted, Barry Pepper miscast, etc.). It mistakes entertainment for enlightenment and frivolity for expose. [Rating: 2 out of 5]

Legion (Scott Charles Stewart, 2010) Legion kicks ass in fits and spurts. Things go Night of the Living Dead-meets-The Terminator at an isolated highway diner when an elderly patron starts babbling obscenities about death before mutating into a wall-crawling, scraggly-toothed menace. She's an angel, one of countless revealing themselves on Earth in a divinely mandated mission to kill Charlie (Adrianne Palicki), a waitress on site, whose unborn baby is destined to save mankind. Some earnest genre thrills are had – the cast, particularly Dennis Quaid, is entirely game for the material – but Legion ultimately flounders on the points of brevity and redundancy; the payoff starts too soon, and when we finally get to the climactic showdown between Paul Bettany's heavenly renegade Michael and the still-working-for-God Gabriel (Kevin Durand; razorblade wings are tops), the movie can't help but be staying out its welcome. A few minutes shorter, and an ending that doesn't outright quote the beginning of the movie, and we might have had something special here. [Rating: 3 out of 5]

Harry Potter and the Deathly Hallows, Part 1 (David Yates, 2010) I'm no expert on the subject matter, but I've read the entirety of J.K. Rowling's Harry Potter series, enjoyed all (Year 2 was shaky, though), and chastised none of the respective films for the disinclusion of any particulars from their source material (I'm no fan of certain reworkings in Half-Blood Prince, but those are dramatic issues, not fan squabblings). Cut from largely the same cloth as its promising, flawed predecessor, this first half of The Deathly Hollows feels scraggly and, even unto its abridged self, a bit incomplete; all the better for a tale of refugees living moment to moment, unsure of their next move, and continuously being pushed to the edge of their resolve. For you muggles, an escalating war in the wizarding world has forced Harry and his two chief cohorts to flee for their lives; the dark side, aka the Death Eaters, have infiltrated society and now pull many powerful strings. Although his poeticism falls short of its intended reach (the film only almost jumps off the screen), David Yates remains the best director the series has seen after Alfonso Cuarón (whose Prisoner of Azkaban remains tops). Awkward longings and impenetrable adolescent emotions make this something of an angst-ridden chamber piece. Yates doesn't let the action turn visceral, and even when people are together, loneliness abounds (to think of what Werner Herzog would have done with the passages in the forest!). Judging by this first half, this touchstone series is well on its way to getting the sendoff it deserves. [Rating: 4 out of 5]