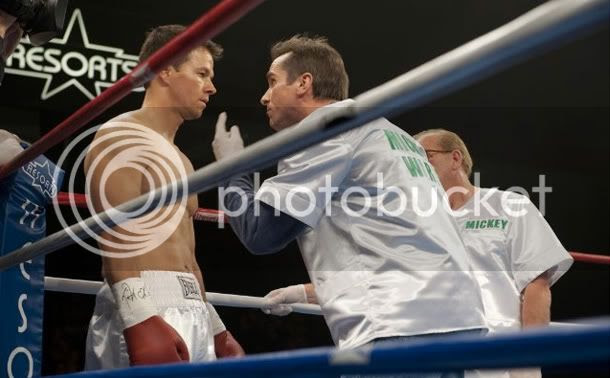 The Fighter (David O. Russell, 2010) If all studio movies had at least half the emotion as the crowd-pleasing The Fighter, there'd be far less to bitch about in this business of film reviewing. An exquisite example of indie sensibilities fused with mainstream cinematic formula, this Rocky-esque tale earns its way into your heart with good old-fashioned legwork, Capra-corn lite with a dusting of grit. Drug-addled family ties fuel this underdog tale of a fighter held back by his possessive and paranoid family, as well as a breathlessly genuine romantic subplot (Amy Adams, what I wouldn't do for you) and a very creepy bunch of girls who make Deliverance proud. It may not be great movie art (a distinction I care little about when I enjoy myself so much), but there's more feeling to it than most of the "great" event movies of late combined. No weak links here; Christian Bale is a standout as a crack addict. For the film and cast entire, let's hope that Oscar knows the real deal when it sees it. [Rating: 4 out of 5]

Unstoppable (Tony Scott, 2010) Confession time: This is the first Tony Scott movie I've seen, period. Seems like I've picked a good time to buck the trend, as this is as pure and breathless as damn near any mainstream action movie in recent memory. The subject matter - a massive runaway freight train carrying toxic goods through developed areas, and the scrappy efforts of money-hungry business heads and Regular Guys to stop it before derailment - has an archetypal purity, and the cast plays it as myth in action (Rosario Dawson in particular lends a quotidian balance). The shaky-queasy camera is used tightly, sparingly, like thick brush strokes; like Michael Bay, Scott's stylistic hang-ups are becoming instinctive, fluid and, dare I say, artful. Looks like I'll be catching up on Top Gun soon. Appropriately trashy, single-mindedly visceral and free of all excess, Unstoppable promises, and delivers. [Rating: 4 out of 5]

Burlesque (Steve Antin, 2010) If Showgirls is the Mt. Everest of self-reflexive, faux-trashy cinematic subversion, Burlesque is that hill from that Hugh Grant movie. Small potatoes to Verhoeven's masterpiece, however, are still quite good, and what astonishes most about this debut feature of pop singer Christina Aguilera is its total absence of irony (I suppose we've come to expect it). Chances are you know you've seen this movie before, before you even watch it, and the filmmakers play against that expectation in frequent character asides that refreshingly strain and deviate from the domino-like plot structure. Stanley Tucci's queer eye and Cher's dictatorial command cushion contrast the wide-eyed determination of Aguilera's aspiring dancer Ali; between a rock and a hard place, she emerges like a butterfly from a weather-worn cocoon. The film recycles cliches with feeling, verve, and savory camp wit; its purity is close to that of Speed Racer. [Rating: 3.5 out of 5]