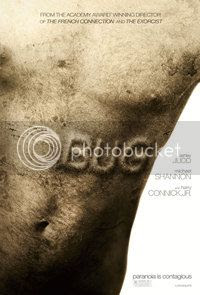 Bug is a freakishly metaphorical look at the self-destructive implications of paranoia gone awry. Two people – Agnes (Ashley Judd), a divorcee who quells her pain over a long-lost child with drugs and alcohol, and her newfound drifter friend Peter (Michael Shannon), who has a knack for picking up on the unspoken qualities of others – share a hotel room that comes to represent their self-erected cave of psychological seclusion. (spoilers herein) Peter claims to be an escapee of a government testing program which has seen him injected with egg sacks of miniscule insects as part of a vast conspiracy program, his bodily wounds and mounting fervor compelling Agnes to believe him; together, their delusions multiply not unlike the very invisible insects they so vigorously try to rid themselves of, their conspiracy theories encompassing everything they've ever suspected in a self-reinforcing web of intricate anti-logic. This admittedly (and intentionally) ridiculous scenario is made compelling not only through the stellar performances of the two leads, but the script’s refusal to confirm or deny the validity of anything they’re saying, the blurred line between truth and reality upping the queasy sense of unease; exactly how much of a unlucky third party’s contributions to the unfolding madness are confirmations of fact? William Friedkin directs this adaptation of the hit off-Broadway play as if it were restrained to the confines of a theater space, here thrusting the mounting madness onto the viewer like the steady potency IV drip bag. His creepy compositions work best when they emphasize the character’s tenuous psychological relationship to their environment, which is thankfully most of the time (unfortunately, in the thirty years since his near-masterpiece The Exorcist, he still hasn’t quite figured out how to shoot a seizure without making it look utterly ridiculous). The film’s breakneck final act is a revelatory fury of alien madness, the hotel room transformed into a tinfoil-lined bug trap that radiates eerie blues and silvers off the character’s oily, scarred bodies. A climactic shot - seemingly taken from the point of view of a spinning ceiling fan - channels the final scene of Aguirre: The Wrath of God, the swirling unease suggesting the final moments of dwindling sanity, like water circling a drain. The slippery line between sanity and madness is driven home here by how frighteningly convincing their delusions appear not only to them, but to us as well.