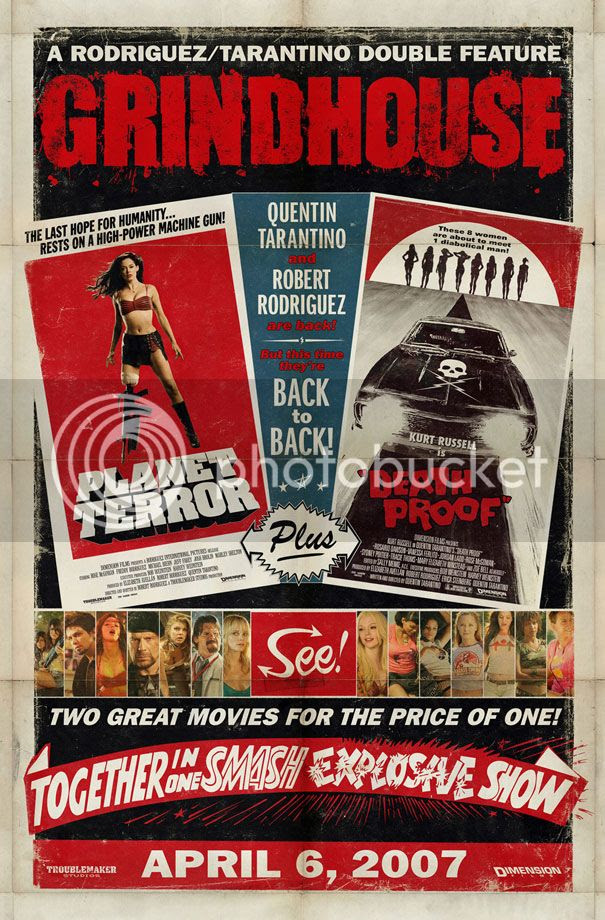 A much-needed second go-around with the double-feature mishmash Grindhouse has been both affirming and reaffirming; the latter in that I still think that Planet Terror is a heluva lotta fun, and the former in that my initial - yet untrusted - skepticism towards Death Proof has been unseated. I walked out of the screening feeling without closure, and were it not for the constraints of time and money, I'd have been back in line for the very next showing.

I enjoyed Planet Terror more than Tarantino's contribution on my initial viewing (more on that later), and while I am an admittedly unabashed fan of many things with the zombie genre (a late night Sci-Fi channel viewing of Night of the Living Dead at age eight can be blamed/thanked for that), it is no unreasonable amount of fanboy bias that swayed my opinion. In my eyes, Rodriguez has crafted a loving homage to the down-and-dirty sleaze and gore of Carpenter, Romero, Fulci, and even a little bit of Cameron, guileless in its execution and aiming only to please a carnal cinematic instinct that hungers for visceral satisfaction. Some have called it postmodern but I disagree; frankly, it gives the film too much credit in the wrong ways, as it is a feature proud of and forward about its largely superficial fun. 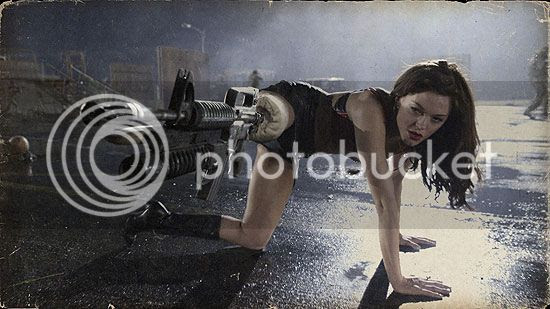 Many have derided the film for the very qualities it aims to fulfill: stupid, overblown, corny entertainment. The phallic imagery of Rose McGowan's machine-gun leg is so deliberately imbedded in fanboy iconography that it seems impossible to take it seriously and, subsequently, impossible to be disappointed by its lack of seriousness. Nary a moment of the proceedings isn't tinged with exaggeration, and while I believe Tarantino to be a far greater artist when it comes to lining his cinematic and pop culture channelings with profundity, Rodriguez is something of a master at to-the-point entertainment. He knows his genre conventions like the back of his hand, and plows through them with a knowing and learned efficiency, tapping into the set-up/payoff narrative structures that guides so much B-movie fare whilst also pairing archetypal characters with the actors most capable of imbuing them with humanistic traits. The movie winks, we wink back, and everyone wins. Granted, some will ultimately see this as bullshit - a view that I don't agree with but I recognize as stemming from personal preferences. Still, while many critics regularly lap up both the serious and the stupid (think Dawn of the Dead and its remake, respectively), why, then, not the seriously stupid as well? 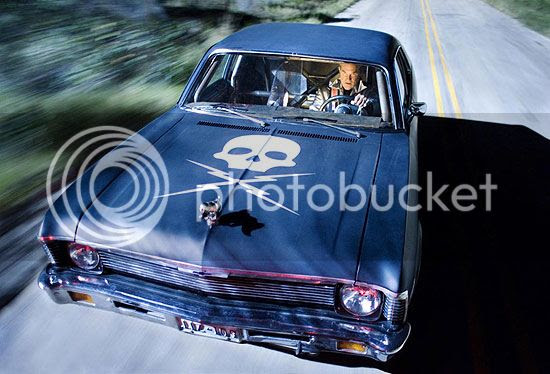 Death Proof is as complimentary as companion piece as I think could have been devised for this double feature, an even more surprising trait because it stands entirely on its own so well. Attentive viewers (here is another way in which repeated viewings help) will notice more than a few instances of cross-over between this and Planet Terror, just as at least one character therein has previously appeared in one of Tarantino's former works. To me, this speaks to cinema as being a self-constructed world unto itself, one as teeming with possibilities and chance encounters not unlike our own reality, the individual movies we see representing but a fraction of the events that take place within its own portrayed reality - they're just what happened to unfold while the camera was rolling. 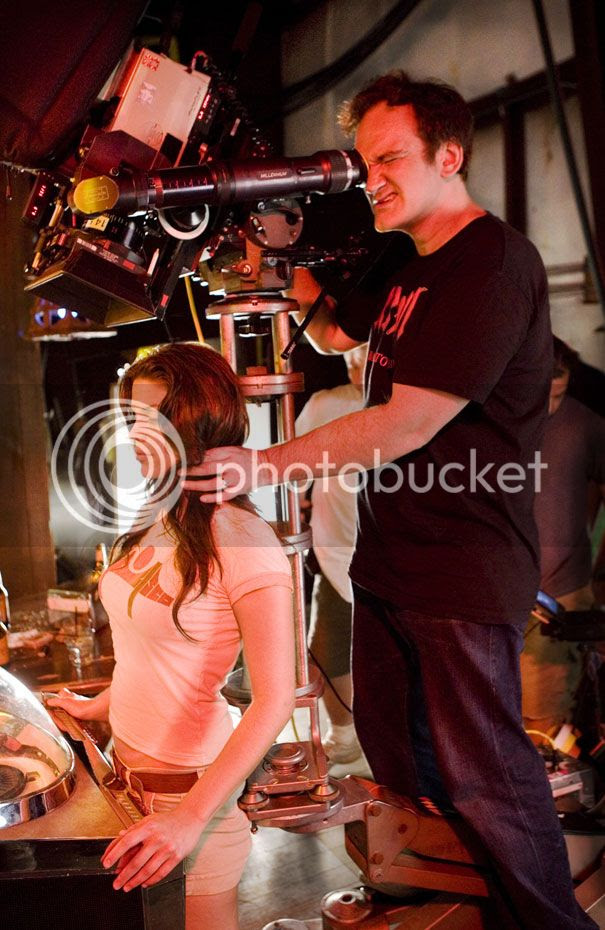 Since my initial, mind-blowing first viewing of Pulp Fiction four years ago, I've always found Tarantino's films to be unabashedly serious and, yes, moral, even as they partake in cartoonish violence, bloodshed, and rape (among other pleasantries). Tarantino's primal entertainment instincts feel driven by a serious code of morality and honor regarding how we go about our lives with others, even if he himself isn't fully aware of its guiding hand. Sin is the key word here - his film's criminally-driven underpinnings generally serve to expose some character flaw that comes back to haunt their initial perpetrators. The necessity of (and harm caused by) violence, the need for redemption, and paying comeuppance for past deeds are all primary themes throughout his work, and I believe Quentin truly, utterly cares about each and every one of his characters and the paths they work out for themselves in his pop culture carnival, recognizing the inherent humor, sadness, and excitement that blossoms out of the many ways in which we routinely manage to fuck ourselves sideways. Maybe he has learned everything from the movies - a quality that certainly adds to his geekiness, for sure, but it's not as if he's trying to convince us otherwise. 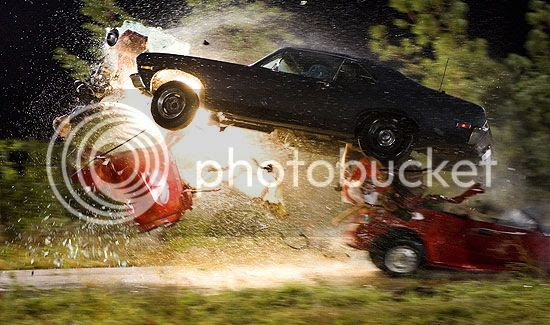 Death Proof confronts us with the subjectivity of violence, internal versus external natures, and the very role the audience plays in legitimizing these elements of cinema. Kurt Russell's villianous Stuntman Mike is like Hannibal Lector jacked up on Cronenberg's Crash - twisted metal, broken glass, and the broken bodies of beautiful women get him off. Seemingly nice enough to the unknowing observer, and it is only when he satiates the internal craving of his libido that he exposes his true self. Likewise, we the audience bear part of the burden in this staged bloodletting: during the build-up to the film's spectacular centerpiece of vehicular homicide, we want to see the wreckage, we're excited to see the mayhem unfold, we crave the visceral rush of watching death happen - specifically, death from a distance, with us safe on the sidelines. But only then does the film repeat the collision four times, each focusing on the death of one of the innocent young women inside. What was once "them" has now become "us," as we're confronted with the familiar faces we've come to know and the utter brutality of their expiration. This is the first half of the film's brilliant genre subversion. 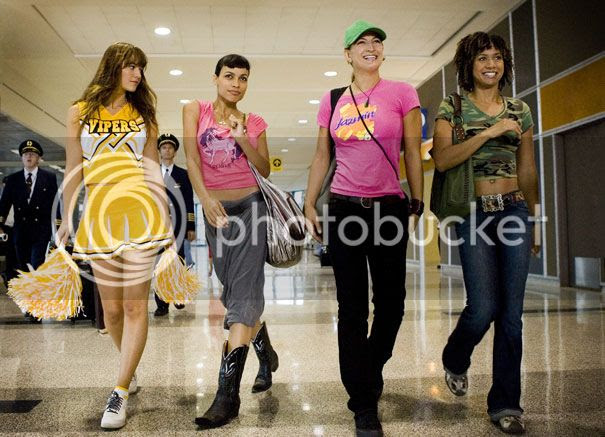 Also key here is an understanding of Quentin's fine female cast and their binary, structured roles. Jungle Julia's posse's faux, bitchy attitudes are an affront to deeper emotional currents and genuine humanistic feelings - feelings we see silently bruised throughout the evening leading up to their death (in short, they're tough cookies, but sweet nonetheless). Zoe Bell's Vanishing Point-obsessed movie crew gang, on the other hand, are greedily self-centered, and while it's certainly no stretch that anyone might want revenge on a speeding, psychopathic motorist who attempts to run them off the road, one gets the sense that this gang has been waiting for a legitimate reason to straight up kick someone's ass - and after having already shot Stuntman Mike, no less (it also doesn't help their case that they left one of their own behind with a creepy fellow who seems to have stepped straight out of Wolf Creek, a film specifically referenced in the climactic car chase).

When Stuntman Mike finally succumbs to the revenge-thirsty rampage, the film has reached an apex of self-criticism. Mike may or may not be crazy, yet we pity his (apparent) demise because of the film's intended role reversal, his humanity having been emphasized in contrast to his would-be victim's superficial indulgences at the cost of others. Mike lies in the vein of a great many movie monsters, as he is only aiming to satisfy his inherent needs in an unaccepting and, for him, incompatible world; he is evil, but he is honest and self-aware of his role, whereas his would-be victims are in denial of their true nature, an untrue to their own when the going gets tough. Amidst all this, the film asks us to develop our own moral opinions on the portrayed events while it emulates the basic genre means of manipulating our moral perceptions, successfully working within the genre without falling to its perceived shortcomings. 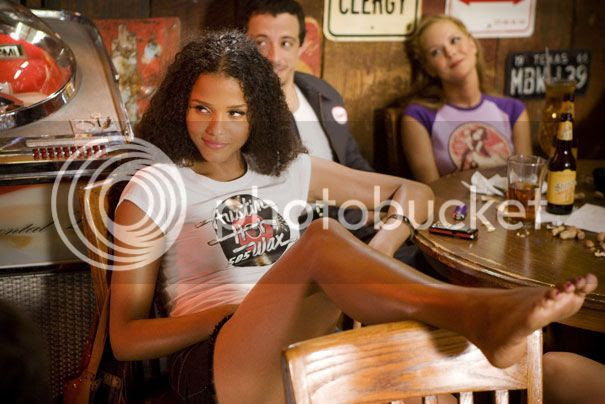 That I borderline disliked Death Proof on first viewing can be chalked up to, very simply, a bad first viewing. Perhaps it was the dissimilarity from Planet Terror that threw me off, perhaps it was a jarring bathroom break between the two films, or Jeremiah Kipp's astute pan in his review at Slant Magazine. Dialogue scenes that initially felt drawn out revealed themselves as brilliantly deliberate in staging character traits and digging out a specific narrative groove, while Tarantino's apparent indulgences (examples coming to mind include a thirty-second shot of Jungle Julia whipping her hair to "Baby, It's You", as well as the camera's routine ogling of her feet) became finely woven elements of his synaptic plot devices. Whatever the reason for my initially "not getting it," it is a frequency I am happy to have finally tuned in to. Planet Terror kicks ass, but its skimpy emotional staying power is a necessary trade-off considering its intentions; Death Proof might be a masterpiece, and is possibly my second-favorite of Tarantino's entire catalog after Pulp Fiction.

Planet Terror: B+
Death Proof: A