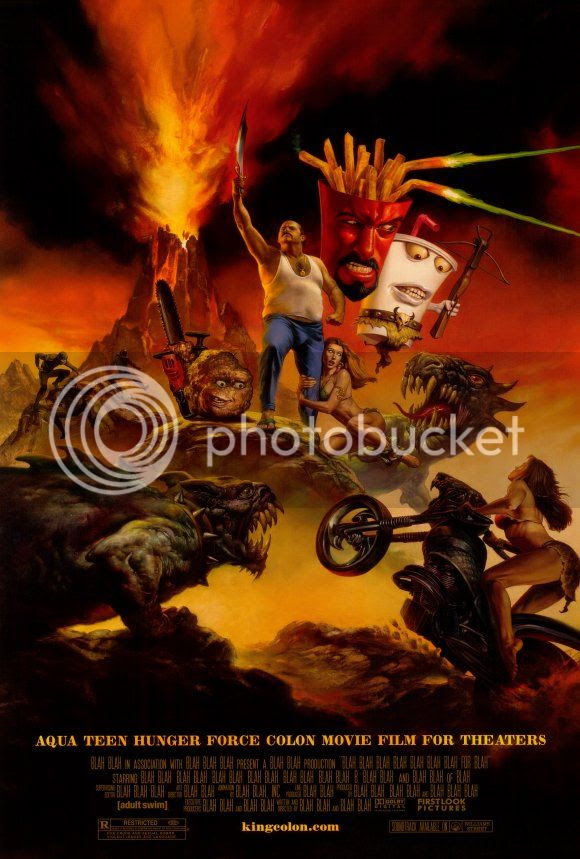 Aqua Teen Hunger Force Colon Movie Film For Theaters may be the most scathing deconstruction of Hollywood (and the culture at large) this side of Robert Altman's The Player. The suburbs of New Jersey echo the end of the universe as envisioned by Douglas Adams in this feature length version of the series popularized by Cartoon Network's Adult Swim, a place at once everywhere and nowhere, where anything can happen at any given time, no questions asked. Essentially a Molotov cocktail lobbed at both conventionalized artistry and anyone who's ever taken their cinematic consumption (or life) for granted, the film works primarily through its own constantly reinforced audience deception, perpetually distracting the viewer with the utterly bizarre nature of it all as it pulls one rug out from under their feet after another. Naysayers cry "stoner!" as if a good toke were the death toll of all intelligence or worth, an almost willful misreading that not only denies the profundities of anti-logic but also the near-impossibility of articulating such thoughts in accessible terms during the waking life. Though not all fans made the transition from ten-minute episodes to ninety-minute extravaganza, it's telling how the irreverence of the film has managed to ruffle feathers amidst those who don't get it (similarly telling is the ease with which many fall back on the 2007 Boston bomb scare as an easy point of derision, a critical cop-out that reveals less about the film than the person addressing it). The film acts as its own litmus test, defying all conventional readings and thus confirming its own significance in the process. To condemn the film for its incoherence is like blaming water for being wet.

Few features of the new millennium have been as viciously and consistently funny, given both the objective nature of comedy and the Airplane!-like rapidity with which the film fires off its endless stream of sight gags and insanity-infused dialogue. Pop culture personality has been condensed into the form of several anthropomorphic fast food items and other assorted personalities (among them, a Plutonian alien sporting a faux German accent and digitized, stoner residents of the Moon) whose collective misadventures are at once about everything and completely pointless, as if every conceivable cliché from Hollywood's junk drawer were assembling into as coherent a form as possible and given a story to match, here revealing the many absurdities of life we invest ourselves in from moment to moment, generally without thought or question.

At its simplest, the film concerns the efforts of our heroes - a milkshake named Master Shake (Dana Snyder), meatball Meatwad (Dave Willis), and French fry packet Frylock (Carey Means) - to save the world from the rampage of a deadly exercise machine (but one of the many mashed-together plot lines), with a talking watermelon, mad scientists, time travel, roller coasters, Space Ghost and Neal Peart of Rush all figuring prominently in the mix. Not a minute goes by that some nugget of our collective consciousness isn't put on the chopping block, although Aqua Teen is a far cry from the ironic cynicism of Seinfeld in its dealing with the minutiae of daily life. Taking nothing for granted, the film explores the underbelly of our modern world as one would the remnants of a building destroyed by a tornado, its unrestrained jambalaya of pop culture parts bordering on Warholian sans the passive voyeurism. The ultra-surrealist tones all but defy serious readings, and it is in the vacuum of expectation or form that the film's satirical bite becomes most potent; its rejection of typical claims to importance is so encompassing that it enters into the realm of the profound. The opening musical number - possibly the single funniest piece of cinema since The Producer's "Springtime For Hitler" - isn't just a brilliant re-imagining of "Let's All Go to the Lobby," but a brutal "fuck you" to all who pride themselves better than the movies or their fellow audience members, leveling the barrier between artist and audience and expressing in no uncertain terms virtually everything that need be said in a fierce act of movie film revolution. "Do not explain the plot, if you don't understand, you should not be here." Amen.