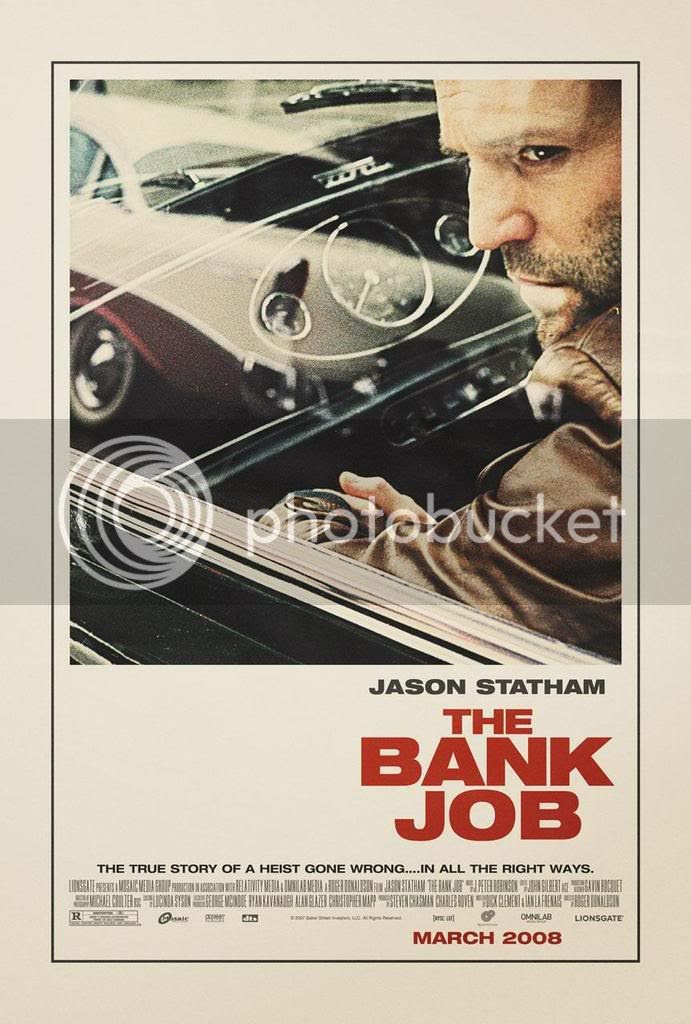 Plot is something of a matter-of-fact, formalized hindrance to The Bank Job's equally matter-of-fact libido, a steady stream of energy, style and wit that finds its way onto the screen here in the form of a self-consciously classic crime story. Largely removed from the territory of more Americanized action fare such as The Transporter and War, Roger Donaldson's stab at the cops-n-robbers genre (appropriately referred to as The BJ in a commendably honest advertising campaign) is nothing short of drunk on itself, a quality that proves both its greatest asset and most damnable impediment (not unlike any number of equally amusing human counterparts). Forget that Jason Statham is this century's answer to Arnold Schwarzenegger and that the plot (involving an unofficially commissioned bank robbery meant to retrieve evidence imperative to an important government court battle, just for starters) reads about as humdrum as one would expect of a film that declares itself "based on a true story" in the same frame as the title itself. The Bank Job uses its performers effectively but the hyper texture of the images practically swallows them up, a far-reaching effect whose execution is hidden in plain view (though admittedly observed with a less than educated perspective on the technical side of film construction). To suffice, each shot appeared to have been deliberately cropped by a mere frame or two before and after each cut, thus disrupting the "natural" flow of events between the unfurling images. One senses a need to keep up with this increase in pacing, an effect that helps to make the less-than-original plot line more convincingly surprising and arresting. Such positives, however, are countered by negatives of almost equal force: the purported editing effect is enforced throughout the entirety of the picture (remember: a review is as much based on experience as on actualities), unwavering even when the scene in question requires an alternate tonal shift. The Bank Job lives up to its marketing by maintaining a cool and steady pace until it gets the, err, job done, but such persistence creates a tangible disjointedness between the film's performances and kino eye. The nudity is hot and tasteful and the entire cast is allowed to partake in the catty banter typically reserved for an egotistical action hero, the more equal footing amongst the conspirators here suggesting a Kevin Smith rehash of Heat, only cool. Statham and company don't sell all of the film's character points (particularly when it comes to the thieves' personal lives), their passively engaging performances both hindered and aided by the film's staccato vibe. The film comes out on the upper side of things by managing to avoid blue balls in the end, but don't think it couldn't use a lesson or two on pumping techniques.