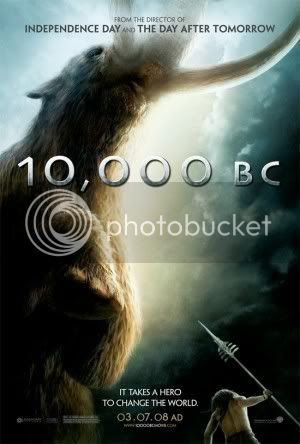 Even though its title would justly cause one to expect a film taking place within the realm of time as we know it, it doesn’t take long for 10,000 B.C.’s blatant anachronisms and wistfully unhistorical events to pile up so high that keeping track of them proves a futile effort. Mammoths never helped build the pyramids and early human clans never spoke English as we know it in the A.D. era, and those are just the ones you can spot from the preview. Sadly, the fact is that even if every ridiculous detail of 10,000 B.C. were accurate enough to pass for museum artifacts, the film itself would remain a smoldering piece of month-old cheese the likes of which the box office has rarely seen. Worse, perhaps, and maybe lamer, but none so bland, lifeless, and unimaginative, cobbled together from parts of a hack screenwriters junk drawer and passed off with the volume turned up to eleven as if it were the Next Big Thing. The film fails to acknowledge the juicy camp it so closely treads—in theory, suggesting a more straight-faced satire in comparison to the wink-wink nudge-nudge deconstructions of lame farces like Meet the Spartans—and so one can only infer that, in order for it to be taken seriously, the makers expected audiences to forget pretty much every movie they’d ever seen before in their entire life.

One can only imagine the pitch meeting, but truly unprecedented here is the flatness of the imagery, the entire film acting as a blow against the use of CGI in special effects. The images are only passable (and just barely at that) from a strictly technical perspective: lacking substantial detail and/or scruffiness to pass as a tangible element in the world they inhabit, entire herds of animals may as well be swarms of gnats for all their effect, and though one can justly argue that pulpy enough imagery will work despite a disconnect between the real and the animated (as was the case with much of The Mist’s creature-feature work), the far-reaching laziness of 10,000 B.C.’s stale direction and cinematography is more than enough to snuff out that flicker of hope. As is typical of a film whose thought is confined to a Happy Meal mindset, the film condescends to ancient culture time and again by designating the elements of their world (mountains, rivers, snow) with what amounts to strictly Newspeak Proper Adjectives: everything is Great and Blue and Old and Great. With each inanity outdoing the last one (unbelievable character interactions, kindergarten-level conceptions of inuit cultures, countless moments of forced revelations…), the central plot (a chosen one must save his people and the woman he loves blah blah blah) quickly subsides as the primary offender. Despite his ineptitude, Ed Wood has become prominent because of his heart and soul; 10,000 B.C., on the other hand, is the Great Suck. There’s no way around it.