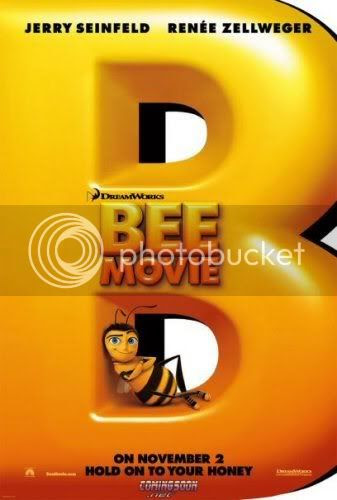 The comedic mastery of Curb Your Enthusiasm has time and again confirmed my suspicion that it was the creative voice of Larry David—not Jerry Seinfeld—that was the driving force behind the 90's most prominent sitcom. That being said, it's tough to not anticipate the first work from a famed figure after a ten-year-dry spell, and Bee Movie sees Seinfeld at the top of his game, even when that very game necessitates a film bound by its own nature. Cutesy is an applicable word here, and, unsurprisingly, Seinfeld admits to having dreamed up the film on the basis of its name alone, long before the story itself would begin to take form. Such is apparent on screen: Seinfeld plays Barry B. Benson, a worker bee horrified at the prospect of forever making honey with no rotation whatsoever on the production line. Hoping to find a life of greater things, he leaves the hive and inadvertently meets the gentle human (voiced by the sultry Renée Zellweger, who remains sexier in voice than most actresses manage with their entire form) named Vanessa Bloome (!), a florist (!!) who believes that all life—insect and human—is created equal. As the story heads into legal territory (when Barry learns of the bee-oppressive honey industry), Bee Movie loses much of its steam in unnecessarily convoluted plotting, as Barry's initial crisis enables an unprecedented and genuine exploration of identity and purpose, aided not so much by the given correlations made between the bee lifestyle and capitalism's effects on human behavior, but by an almost eerily plasticine, theme-park animated look that proves nothing less than gonzo. The shtick is both obvious and simple but its use here defies simplicity, with Seinfeld shedding much of his "about nothing" cynicism for a more bold and inquisitive outlook on life. Too bad, then, that the film feels unjustly leashed not only by the onslaught of titular puns, but also Seinfeld's unavoidable penchant for purported witticism—knowingly "clever" insights that feel like decade-old leftovers reaching for laughs.