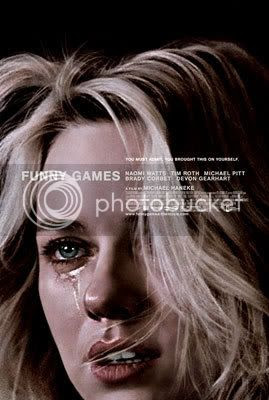 A funny thing happened the other day. I rented and watched - with much trepidation and skepticism, wondering almost aloud to myself before and during if it was even worth my while - Michael Haneke's English-language remake of his own Funny Games, a film I despised and still find to be more than a bit infuriating in retrospect. Relativity is key here, as I can't say I liked this new version, but viewing what was virtually the same film from the deliberate standpoint of having already seen it, hence knowing what was coming, I was able to appreciate it more even as it pushed all the same wrong buttons again. My favorite review of the new version - unofficially dubbed Funny Games U.S. - was that of Ed Gonzalez (check out Jim Emerson's intelligent take-down, too), who merely reprinted his review of the 1998 original, word for word, save for the respective names of the new actors and actresses. Such was a delightfully understated commentary on the nature of the film itself, although like Gus Van Sant's unfairly maligned Psycho, Haneke's commentary here doesn't seem so much an empty grab for cash (anyone familiar with his obsessions and themes should know better) than an experiment in both familiarity and precision. Haneke's argument remains the same: that violence is bad and anyone immoral enough to obtain pleasure or prosperity from such (case in point here being destructive American culture, most blatantly signified by the image of a blood-spattered television) could stand to endure a dose of their own medicine. Funny Games' central concept - a vacationing upper class family is terrorized by two disquietingly pleasant thugs who challenge their moral and physical limitations with a series of intimidations and physical threats/punishments - remains theoretically brilliant, though again undone here by a sense of superiority devoid of self-examination; just a smidgen of reflexive humor alone could have saved the day, or the more constructive notion that our doomed "protagonists" have even the slightest say in their fateful outcomes. (Spoilers ahead.) A nearly ten-minute, static take in which Naomi Watt's housewife - bound, practically nude - suffers the initial pangs of shock and downfall following her son's horrific death exhibits Haneke's commanding technical skills, and so too does the entirety of Funny Games U.S. exhibit similarly honed talent in framing, lighting and editing, subtle differences (like the re-assembled footage that differed between Apocalypse Now and Apocalypse Now Redux) that may not speak to their own presence but ultimately lend a different feel, even if at but a subconscious level. Most significant a difference, though, are the performers, who aren't necessarily better than their predecessors than they are less conducive to the unfairly calculated inhumanity of Haneke's dead-end maze, lending pathos and hope to a scenario in which none has otherwise been permitted. Haneke's statements are no more so agreeable than the last time I saw them at work (fascinating to behold even as they are difficult, if not impossible to get behind in such an incarnation) but his execution has proven more powerful than I expected here, empowered, in a way, but this version's more pronounced thematic tones, as if admitting relative obviousness as a means of disarming an otherwise condescending sense of banality. Still, it's almost completely for naught when Haneke plays so deliberately unfair, from a most unfortunate of (apparent) coincidences to the still ridiculous "rewind" sequence. Flogging the audience is one thing, but to deny them free will in their role - thus responsibility - is something else