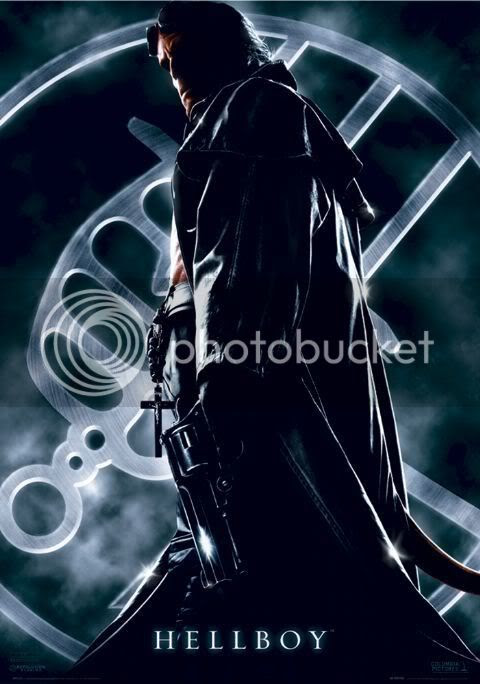 Hellboy suggests the kind of loquaciously laid-back, dialogue-driven movie Kevin Smith only wishes he could make, wickedly cool and soulfully deep amidst its superhero outsider story. Artistically resonant even as it deliberately follows a contemporary narrative structure, Guillermo Del Toro's adaptation of Mike Mignola's graphic novels remains among the most humanistic of modern action films, shedding faux-ponderous attempts at seriousness for out-and-out juvenile bliss - a throbbing vein of humanity running through the core of a dank, lavish and evil world. The film declares its themes early on when our narrator asks us if a man is defined by his origins or his actions, and so too must the supernaturally endowed Hellboy embrace his torn identity as a socially yearning person and a misunderstood beast, his role as a government-funded defender against the forces of evil separating him from practically all human contact. Freed from an alternate dimension by the experimenting Nazis before being taken in by an American scientist, his is a part that may prove the penultimate of performer Ron Perlman's career. Cocky and snazzy and entirely detailed in his methodical approach, his is a turn that belongs with the greatest makeup-reliant roles of all time, which is to speak no ill of the rest of the cast, who approach the material with the same zestful imagination. Torn love haunts the titular beast, who searches often aimlessly for meaning amidst the life-threatening woes of his nature-nurture existence. Del Toro constructs his fantasy with bold colors that emphasize character natures and relationships while also making for visually sumptuous setpieces between our Devil-spawned badass and a number of monstrous hell-hounds (among other encroaching forces of evil). Hellboy emphasizes his existential plight so effectively that an external conflict concerning resurrected Nazi forces seems comparatively dull, but such forcible emotional entanglements are among the distinct pleasures of Del Toro's painterly canvas. Finding legitimately (which is to say, cool) quirky humor in both the extreme (the curmudgeony laments of a resurrected corpse) and the mundane (Hellboy's lair - the Bureau of Paranormal Research & Defense - is located in Newark, New Jersey and is disguised as a Waste Management business), this is an origin story turned character study of legitimate staying power, with brains, brawn and heart to spare.