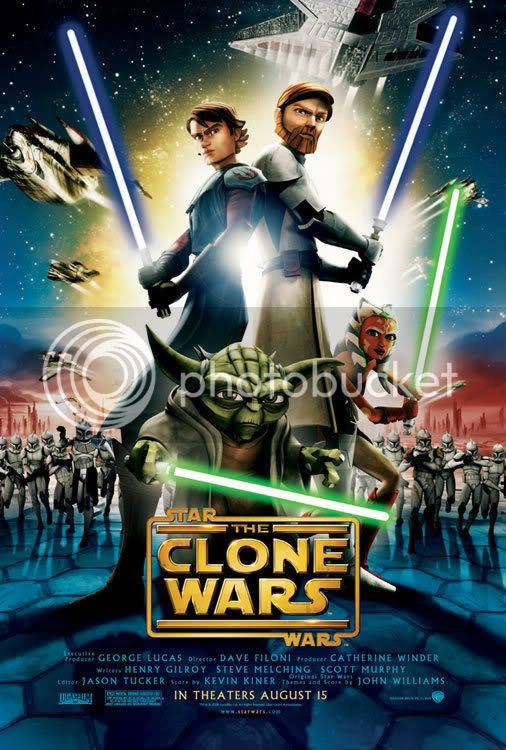 Is The Clone Wars really the pilot for a Star Wars television series, or is it a last-ditch effort to make the prequel trilogy look better via retrospective comparison? I, for one, have always enjoyed the much-derided Episodes I, II, and III, problematic though they are and somewhat in spite of the zealotry held for/against them by varying devotees of Lucas' long ago, far away universe (as religious extremists once force others to re-examine their faith, so too can unreasonable and unpleasant movie lovers ruin it for more pacifist fans). Defend this hunk of crap, however, I cannot. Bad television and worse cinema, no change in format could hope to repair the insulting flaws abound in this tossed-off junk pile; if kids are what Lucas and company had in mind in their preparations here, then we should all feel as though the very fruit of our loins have been directly insulted. Transpiring between the civil breakdown of Attack of the Clones and the political upheaval of Revenge of the Sith, The Clone Wars can only be incidentally blamed for carrying with it some degree of preordained conclusions. Lacking characterizations (let alone sufficient ones), visual dynamics and anything resembling pacing or narrative development, this pilot encapsulates everything wrong with the prequel films -- stilted dialogue, inane storytelling devices, flimsy attempts at narrative tension via undeveloped personal conflicts, and characters repeatedly stating the obvious as a means of forwarding the plot -- even as it takes them to entirely new levels of embarrassment. Facing a droid army on some far-off planet (no, I don't care enough to look up the name), the duo of Anakin Skywalker (Matt Lanter) and Obi-Wan Kenobi (James Arnold Taylor) becomes an unexpected trio when the former learns that he has been assigned a pupil, the eager-to-learn Jedi in training Ahsoka Tano (Ashley Eckstein). Coasting on autopilot, The Clone Wars mistakes moldy sound bytes for character interaction and moral insight, an affront to even the purportedly lowered standards of children's television. In both style and substance, the film likens itself to what Jim Emerson calls "Ferrari" filmmaking -- sleek and fast, and in this case seemingly deliberately so, so as to cover up the almost complete lack of anything beneath that superficially shiny hood. Never mind the fact that the animation style itself looks blocky, creepy, and un-emotive: actions scenes zip by without any weight or substance, lazily framed, choreographed and edited (though a vertical battle along the rise of a plateau held my attention), and save for some amusing antics provided by the less-than-capable artificial intelligence sported by the droid army, the film proves depressingly, fleetingly devoid of anything comparable to genuine human emotions -- pure, pulse-deprived exposition posing as morality-lined action extravaganza. There are no feelings here, nor legitimate characters -- merely shadows of their existence. The force is gone with this one.