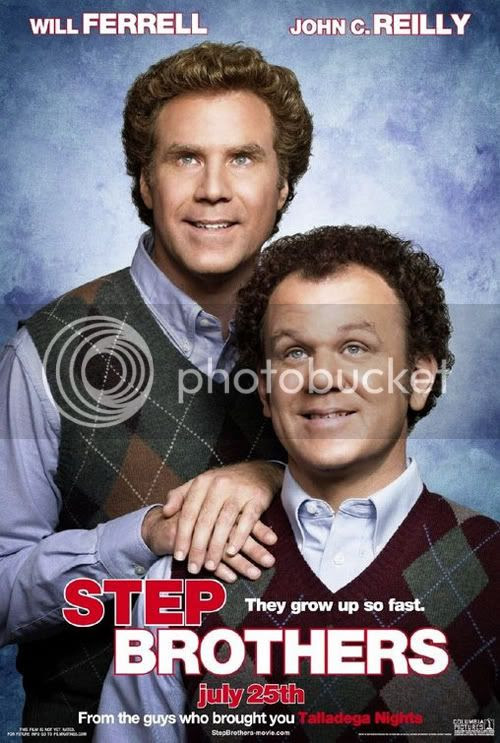 As was the case in Adam McKay's previous films, Anchorman: The Legend of Ron Burgundy and Talladega Nights: The Ballad of Ricky Bobby, Step Brothers stands as a pristine example of excellently realized, largely improvised comedy given shape and form via the synchronized methods of both actor and director. Insofar the only director to have effectively and unwaveringly tamed Will Ferrell's serio-comic tendencies, McKay's brand of parody channels his cast and their unlikely, almost profound ability to embody the most intellectually obtuse and outright idiotic of characters with the same level of intensity one would expect in a Shakespeare performance. Why, then, is this newest pairing between the two so noticeably off? Step Brothers is knowingly and deliberately downbeat, sporting a scenario at once hilarious and frightening, the humor compounded by the sheer level conviction granted to it. Will Ferrell and John C. Reilly are Brennan Huff and Dale Doback, two ne'er-do-wells still residing at home even as they have both reached over-the-hill status. Emotionally and socially stunted beyond repair, their insulated lives are thrown for a proverbial loop when their single parents meet cute and promptly wed, ultimately pressuring them both to find jobs so as to establish lives of their own. Whether apparent in their endless social deficiencies (on a job interview, both choose to wear tuxedos) or their alternating bouts of love/hate behavior, Ferrell and Reilly so encapsulate the regression of their characters that each actor respectively disappears into their role, inviting empathetic speculation just as much as crotch-grabbing bouts of laughter. If Step Brothers is in any way an unqualified success, it is in the implementation of truly crude and boldly tasteless humor, initiated by the must-be-seen-to-be-believed image of Brennan rubbing his testicles on Dale's drum set and furthered by various button-pushing moments of adulterous sex, erotic fantasies, living burials and dog feces. Insofar as its characters go, however, Step Brothers leaves things hanging too much to equal the structurally satirical brilliance of Anchorman and Talladega Nights, in part because the film's central premise is more intrinsically limited on a dramatic scale, but furthermore because the script's core development is less fleshed out than said previous works, rendering the experience satisfactory in the moment only to appear empty in hindsight. Props to the short running time, then, for keeping things closer to the excellent short film buried somewhere within this feature length product, a cumbersome work but one nevertheless blistering in its excavation of our deepest fears, desires, and the inherent absurdities therein.