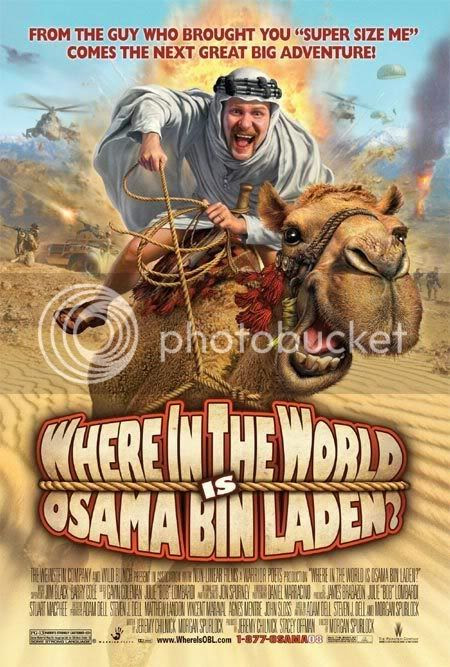 Super Size Me spent 100 minutes telling us what amounted to common sense decked out in infomercial aesthetics: fast food is bad for you, and here's a schmuck crazy enough to prove it by converting himself into a human Happy Meal. In the unfortunately titled follow-up Where in the World is Osama Bin Laden?, director Morgan Spurlock similarly trades in obvious and contrived gimmicks as markers on the path towards enlightenment, here having moved past the evils of fatty McFoods and into the realm of international terrorism, purportedly driven by his desire to create a safer world into which his still gestating son can be born. Though certainly (one would hope unavoidably) less pat and redundant than its overrated predecessor, there are moments of the film's questionable thesis that might suggest otherwise. Rather inadvertently, Spurlock's approach routinely brings the material within arm's reach of "dumbed down", the film constructed as an in-action argument against knee jerk political extremism from the inside out, aimed squarely at the apathetic; any U.S. citizen that's encountered any remotely radical American news source in the past six years will already know most of what Spurlock has to say, though the fact that knowledge about anti-U.S. sentiment around the world in response to our oppressive foreign policies is to date not as well-known and accepted as that concerning the unpleasantries of McDonalds, is reason enough to justify the film's existence. Needless to say, Spurlock never encounters the 9/11 mastermind, though his self-aware “journey” does afford him the chance to speak with many throughout the Middle East as regards their thoughts on America, foreign policy, Israel, terrorism, religion, and how the social ailments conducive to extreme acts of violence are reinforced by the political powers that be. Aware of its own, rather off-putting sense of American privilege, Where in the World is Osama Bin Laden? takes care to never condescend to its audience or subjects, despite the inherent stupidity in its titular, core premise, and a tendency to employ caricatures and hyperbolic anecdotes in its quest to dispel trademark American fears. Recognizing his own relatively uninformed place in the world, Spurlock turns his own ignorance (first evident in an ego-driven and off-putting opening animated sequence) around to unexpectedly sincere effect, "discovering" that not all Muslims are terrorists and are by and large, in fact, like you and me. Recalling the criminally underseen Walking to Werner, Spurlock’s journey ultimately becomes about more than one man, though it is one only intermittently made meaningful in ways more substantial than its reliance on rapid-fire, Spark Notes-like factoids on American history and the War on Terror. That it chooses not to go further in addressing connective issues such as the responsibility for governmental foreign policy or the relationship between economic privilege and political apathy is less a failure than a deliberate choice (if not an admission of known limitations), one befitting the majority of the film’s intended, closeted audience, if endlessly aggravating for just about anyone else. For a film about finding the world’s most infamous needle in a haystack, Where in the World is Osama Bin Laden? is woefully small-scale, often misguided but never disingenuous.