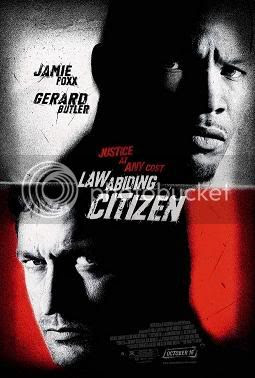 While preferably to the typical Saw entry by about a five-to-one ratio, Law Abiding Citizen still isn't any good. Drab and borderline lethargic from virtually any cinematic standpoint (only the climactic image, which involves a character in a locked cell, offers something in the way of lyrical creativity), the most fascinating aspect of this modest train wreck is that anyone decided to give so embarrassingly nonsensical a script the green light. At the outset, Clyde Shelton (Gerard Butler) is the titular character: a loving husband and father who, after the tragic murder of his family, can only find comfort in the thought that the guilty will receive their due punishment at the hands of the state. Alas, when D.A. Nick Rice (Jamie Foxx) strikes a deal with the assailant in exchange for testimony on a much bigger fish, Shelton snaps and spends the next handful of years planning his revenge. So commences a string of murders beginning with the systematic torture and dismemberment of the sicko who killed Shelton's family, the intended and heavy-handed lesson being that the constitutional rights of known (but not convicted) killers should be seen as subservient to the lives of the innocent still in harm's way, with Shelton ultimately offering himself up for theoretical sacrifice in something of an inversion to Seven's harrowing climax. Even without taking into consideration the relatively black and white outlook on justice herein, Law Abiding Citizen is about the last argument one would want to seriously represent such a cause; as a moral thesis, it amounts to little more than heavy-lifting lip service, while the flaunting of so much purported violence (Shelton sends a videotape of the aforementioned dismemberment to Rice's home, etc.) confirms the film's interest in physical brutality over moral scrutiny. Seemingly able to orchestrate violent events from behind bars in a blatant manipulation of the legal system (made only to subsequently call out its flaws), Shelton's serpentine plot against the government is only sparsely made believable; at least Christopher Nolan's Joker seemed capable of pulling all the strings necessary to put the squeeze on an entire city, even if the particulars were never laid out in the open. As braindead entertainment, Citizen proves to be camp of the inadvertent kind; as philosophy, it's pure mistrial.