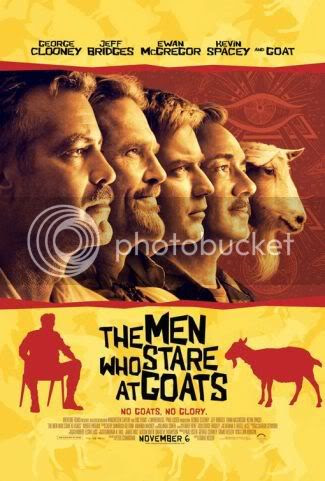 Seemingly intent on pleasing even those members of the audience who would otherwise be offended by its implicit lampooning of the American military complex, trademark wartime idiocy and all comparable areas of interest, The Men Who Stare At Goats comes to us as the latest political satire to have inadvertently sliced off its own pair. Concerning a military unit (the "New Army") developed post-Vietnam with the intention of creating psychic-enabled super-soldiers (referred to as Jedi Warriors, thus making the very decision to cast Ewan McGregor as the surrogate straight man some kind of desperate joke), the film follows McGregor's Bob Wilton as he decides to take his journalism career to Iraq during the dawn of the War on Terror, hoping to salvage his ego in the midst of an impromptu marital incineration. Fate, it would seem, brings him to Lyn Cassady (George Clooney), a New Army veteran traveling to Iraq for his own, often misleading, purposes. What follows is part road movie comedy, part new age existentialism with a forcibly ponderous tone that strikes all the wrong notes (the opening credits assure us that "more of this is true than you would believe", but even this seems less intent on actual enlightenment via humor than a mere conditioner for the detached, altogether "safe" black comedy to follow). A bit of research on the original book - unread by myself - suggests that whatever changes were made en route to the screen were surely for the worse. Either way, one must stand in a sort of awe at the skill it must have taken to waste the talents of Clooney, McGregor, Jeff Bridges and Kevin Spacey in the same film, let alone the same scene.