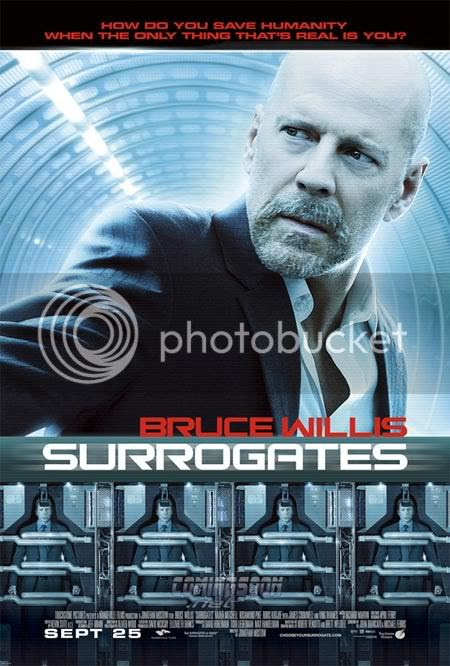 Star Trek might be the year's sci-fi rage, and while a fine space opera it may be, that it holds the upper hand amidst the competition only highlights how the exquisite work of Jonothan Mostow seems fated to go unappreciated in its time. With the WWII fable U-571 the only blemish on his resume (and that particular film's only flaw being the fact that it isn't great), his genre craftsmanship - while never as rapturously perfect as his predecessors (John Carpenter, James Cameron, Blade Runner-era Ridley Scott) - is nevertheless far and away from the typical studio worker. Surrogates joins Spielberg's sci-fi contributions and Michael Winterbottom's Code 46 as one of the defining dystopic visions of the decade, eschewing special effects glamour for a well-worn world in which the decidedly alien is an accepted given. The deliberate banality employed in the presentation of progressive robotic technologies renders the scenario with exponentially greater moral scrutiny and, concurrently, a creepy disconnection from human reality. As unfolds via an opening newsreel montage, the near future holds for us the development and mass social acceptance of surrogates: synthetic, humanoid robots used by the populace for their daily goings-on while their living flesh-and-blood selves pilot them from home; small groups of naturalist humans have quartered themselves off from the larger world and maintain an uneasy peace treaty (the plot centers around a terrorist weapon capable of destroying a surrogate in such a way that the host, too, is terminated; unlike those plugged into The Matrix, these things are supposed to be safeguarded here). Mostow's big budget B-movie draws exquisite everyman performances from the cast (in addition to eerie, necessarily artless performances as their characters' respective surrogates); Bruce Willis, as a cop not entirely unlike Blade Runner's Harrison Ford, is as flesh-and-blood empathetic as any role he's helmed since Die Hard. Scaled as if to suggest a budget even smaller than the actual, Surrogates seems less like a 21st Century would-be blockbuster than a lost 80's relic only just rediscovered. Either way, we're lucky to have it.