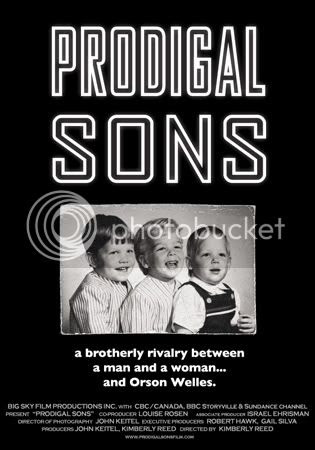 Kimberly Reed's no-frills, diary-cum-documentary Prodigal Sons has already been compared to the ultra low-budget sensation Tarnation, and in terms of an autobiographical work crafted less on financial resources than sheer force of will, the parallels being drawn are apt. In terms of blistering emotional incisiveness, however, I was also reminded of Michael Apted's 21 Up, the last of the long-running Up series I've yet seen, and imcompletely at that. The titular age when I attempted to view the film, I found its directness and clarity too much to handle, and, feeling an almost inconceivable level of intimacy – as if God were staring right at me, and only me, from up on high – I decided to return to it at a later time. That was four years ago. Prodigal Sons is a similarly emotional, naked experience, and even sharing little in common with the specific trials of its maker and subjects, the experience it imparts was one difficult to surmount on the part of this viewer.

In an era of pop documentaries that reduce their subjects to gimmicky setups and patronizing lessons (I'm looking at you, Spurlock), Prodigal Sons is a near-profound palate cleanser. Director Kimbery Reed is also among the film's main subjects, she a former resident of Helena, Montana, last known to her friends and neighbors as the popular, high school quarterback Paul. Ten years later, her complete gender transformation seems to have been only half the battle in reconciling the fractures in her identity. Rather easily accepted by the bulk of her family and former classmates (though one senses that ugly, xenophobic encounters may have been deliberately left on the cutting room floor), Kim finds the most difficult person with whom to reconnect is her brother Marc, who maintains something of a grudge in response to both her former popularity as well as her new identity.

Adopted at a young age and the victim of a car crash that saw part of his brain removed, Marc is a tragic outsider not just to his family but to the bulk of humanity, well-meaning in his intentions but prone to violent outbursts and immature sibling rivalry, often falling back on Christian abboration of purported sexual deviance (both Kimbery and their little-seen brother Todd are gay) amongst more general manifestations of his emotional estrangement. The sorrow evoked by his personality disorder and reliance on medication is put to serious tests as his mental stability wanes, repeatedly threatening the safety of his loved ones in a manner that appears entirely out of his control. The sight of Marc's destructive behavior seems less exploitative (during his calmer times, he actively endorses Kim's filmmaking project, even as its most scrutinized subject) than it is not fully explored, but that's small potatoes given how intimate Reed manages to be – and how thoughtfully and patient and balanced at that – under the circumstances. The slightly awkward affectations are more than worth the up-close-and-personal benefits.

That Prodigal Sons shifts from being primarily autobiographical (Kim on Kim) to biographical (Kim on Marc) indeed creates something of a tonal schism, but it's one easily justified considering the overall transparency Reed employs in her construction of the film (rather than shying away after a violent encounter between herself and Marc, we share the deafening solitude as she drives away in the truck that caused the initial dispute), the sum of which qualifies the film as nothing less than a work of profound humanitarian worth. One almost wishes for an Up-like continuation some years down the road. Once again proving the cinematic medium's inherent empathetic power, these are characters that, once known, are difficult to live without.

All of this is to say nothing of Prodigal Sons most eye-opening revelation: that Marc is, in fact, the biological grandson of none other than Orson Welles and Rita Hayworth, a discovery that sadly proves less beneficial to the ailing Marc than we'd hope. Such embodies the notion that truth is indeed stranger than fiction, but it also allows for the soul-piercing inclusion of Welles' infamous musical recording of “I know what it means to be young (but you don't know what it means to be old).” Such wisdom is hard-won, and Prodigal Sons earns every ounce of it.