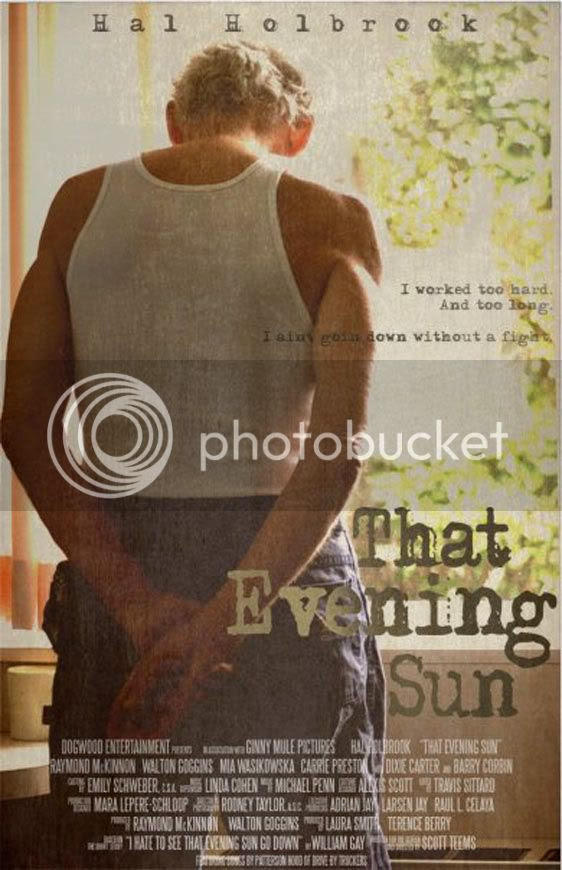 Encapsulated by an opening shot of the elderly Abner Meecham (Hal Halbrook, one of our finest) gazing at the lush forest greenery surrounding his nursing home, That Evening Sun strikes a careful balance between no-frills naturalism and restrained poeticism. This particular example sees the reflective surface of a window juxtaposing the years of experience apparent in Abner's face with the cyclical timelessness of the natural world (add to that a touch of green-infused envy), one he damn well intends on enjoying again before shuffling off his mortal coil. Fleeing the nursing home and returning to his farm – one he owned and tended for most of his life – Abner finds his home now occupied by Lonzo Choat (Ray McKinnon), the property having been rented out by his son, legal expert and caretaker of his father's estate in the months following the broken hip – now healed – that saw his residential relocation.

As a known alcoholic with an abusive streak, Choat takes an immediate disliking to Abner, and vice-versa. If the emerging plot details sound on paper like the makings of a trite “us versus them” drama, such is a creative rut masterfully avoided by writer/director Scott Teems, who gives each character/performer full room to exist as a mass sum of qualities, many unknown, and through this recognized complexity examines the many social binaries at work – fathers and sons, husbands and wives, the gap of generations – with an assured calmness that allows even the more villainous types their moments of character-defining integrity. Unlike, say, The House of Sand and Fog, which made excuses for Jennifer Connolly's irresponsible homeowner in the name of a phony occupation metaphor, That Evening Sun forgoes absolutisms and sees that opposing interests can both, in fact, be in the right.

Such often feels like a generous stance given Choat's routinely indefensible behavior, one caught up in self-destructive tendencies (drinking, gambling) even as it's driven by a tragically sincere desire to do good and provide for his family (then again, the same can be said about the frightening nature in which he overprotects his daughter). Abner simply wants to enjoy what he worked hard for during his life, during the time he has left, a hard truth lost on his son, who insists – despite overwhelming evidence that Abner can be and is quite self-sufficient – that the nursing home is “the best option” (“For who?”, strikes back Abner, whiplash fast and twice as sharp). One could probably read parallels to current national issues – namely, the effects of the economy and social security on seniors – but the fact is that politics, like the film, are rooted in simple (not simplistic) notions of right and wrong.

Society sees Abner as little more than a nuisance, one that will – quite literally – go away if ignored long enough; such is but one of the necessary troubles of death that lurks in the film (and leave it to the brilliant character embodiment by Holbrook to turn one such outcome into one of the funniest moments of the year). That Abner can sometimes be said to go too far in his anger – really, who can blame him? Like a Greek drama, That Evening Sun is a shifting moral quandary, one in which losses are a given and – if justice should prevail – at best uncompounded. Forget Up in the Air: an incendiary portrait of rotting and displaced values-cum-Rorshach test, That Evening Sun is truly a film for our times.