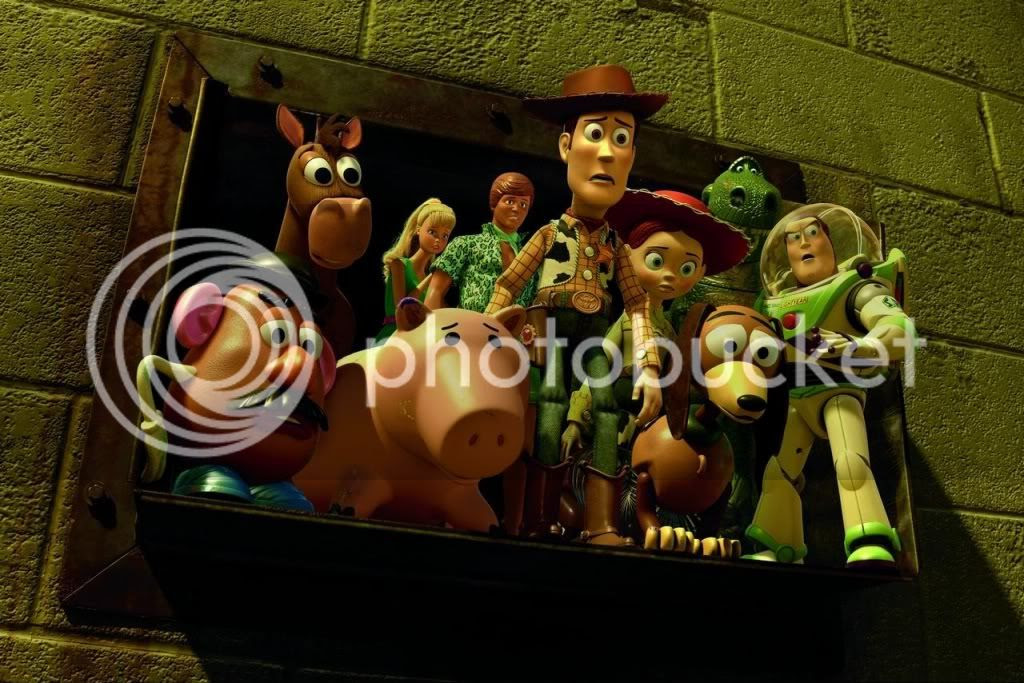 Toy Story 3 (Lee Unkrich, 2010) The better they get, the tougher it is to reconcile Pixar's storytelling flaws from their commercial art savvy (which is to say, the more sublime their surroundings, the more strongly said flaws will stand out). Structurally, Toy Story 3 extends the arc of the previous two films with what seems like retrospectively inevitable perfection. If the 1995 original was about who we are and the lauded sequel where we come from, this long-gestating, final chapter (so they say, and I sincerely hope so) primarily concerns where we are going. The usefulness of our familiar characters (some of whom have departed since we last saw them, gone from Andy's room via trash or trade) is waning in light of their owners growing up, but Andy's intentions of saving his toys goes awry, their ultimately being donated to a nearby daycare center. The manipulative, greedy actions of other toys test the resilience of Woody, Buzz and company once again, with the the plotline's similarities to earlier adventures masked in part by endearing genre indulgences (a Great Escape-inspired jailbreak sequence involving Mr. Potato Head is downright trippy and positively the shit), and, less successfully, by comedic deviations that tread close to the snotty territory of the Shrek sequels. Ken and Barby's time in the spotlight should be reduced by half, and a misguided running gag has the audacity to impede upon a moment of shocking brilliance, yet 3's hit to miss ratio remains remarkably high even with these blemishes. The philosophical bend – that all things must, ultimately, come to pass – culminates in a profound image of solidarity as soul-searing as anything this side of Snow White, animated or not (and even manages to one-up the hellmouth sequences of The Brave Little Toaster). But for a nip tuck, Toy Story 3 might be a masterpiece. Heck, I'll take it anyway. [Rating: 4 out of 5]

Green Zone (Paul Greengrass, 2010) I'd likely be damning Green Zone for relatively facile political messages if it weren't for the regrettable fact that more than a fair share of people out there are in desperate need of them. More than just Americans ignorant to the business side of politics (a corruptive force host in both major parties – democract with a small d, thank you), the general possibility, likely probability of hostile manipulation on the part of the powers that be is the primary learning point routinely lost on those mentally tamed by media noise in virtually any developed country. This stylistic, if not outright thematic follow-up to United 93 (which, as a plainly presented dramatization of recent history, is already starting to look better as the part of a larger whole) will likely prove irritating to those who smelled bullshit early on in the Iraq invasion; that being said, a pivotal statement dramatically shifts the tides at about the halfway point, succinctly, devastatingly encapsulating the experiences of Matt Damon's Roy Miller (based on real-life Army chief warrant office Richard Gonzales), a weapons investigator whose experiences in combat have made him determined to send word up the ranks that their lies a disconnect between the intelligence being provided (active weapons labs in Iraq) and the actualities on the ground (there's nothing there). When the picture shifts into action mode, it becomes a probing meditation on truth, from Washington politics to more basic xenophobias. Greengrass's shakicam is honed, precise, and linear, a step in the right direction from his gaudy Bourne sequels. The script remains formulaic yet fully felt, elevated by tender humanitarianism and poetic gashes of emotion, none more brutal than the body of a defensive young man – having made the foolhardy decision of reaching for the family gun when American troops raid his home – collapsing, instantly, into his wailing mother's arms. [Rating: 3.5 out of 5]

The Wolfman (Joe Johnson, 2010) While the final product is only arguably necessary as far as remakes are concerned, Joe Johnson's respectable ode to Universal's classic horror films certainly has fun on its side. Knowingly precise in its new school replication of old school filmmaking styles, this generally faithful retelling of the 1941 classic gives the Lawrence Talbot character (then, Lon Chaney, Jr.; now, Benicio Del Toro) a Freudian twist, complicating his lycanthropic curse with the damning bonds of family. The whole thing only occasionally becomes more than a capable homage to what came before, but it's one expert and loving enough to float the proceedings on borderline cheesy enthusiasm alone. The broadly skilled cast (Hugo Weaving is tops, but Del Toro, Emily Blunt and Anthony Hopkins bring their game faces) might have you think it was great literature being enacted, and while The Wolfman often veers towards the realm of camp, no irony is to be found herein. The broad monster violence and novel cinematic devices used to milk said gore's potency (less is more, tried and true) offer modest delights, which is far more than can be said for most horror outings. [Rating: 3.5 out of 5]