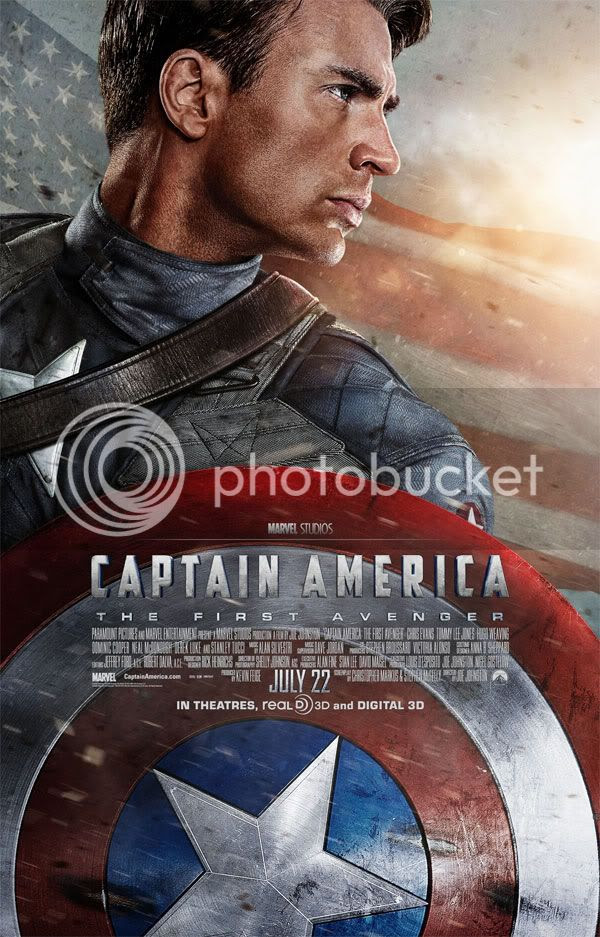 The only amazing thing about Captain America is how utterly unremarkable it is. Sad to say, but it's that very creative staleness that's become par for the course for Marvel studios, whose last movie worthy of a genuine recommendation in my book, Iron Man, was practically an accident. It seems that letting Ang Lee (and, eventually, Sam Raimi) run too far with their own instincts has inoculated the studio from ever again giving a director more than passing authority on their franchise material. God knows Kenneth Branagh couldn't do much with Thor, and now Joe Johnson (of the underrated and moody horror homage The Wolfman) is saddled with the mundanely rendered origin story of WWII hero Steve Rogers (Chris Evans), a strong-willed weakling from Brooklyn routinely refused from the draft, but whose persistence and guts see him recruited as part of a military super-soldier experiment that transforms him into the titular good guy. As far as boring blockbusters go, Captain America is a cut above the rest, its superior mediocrity more the result of Johnson's expert direction and action staging than the capabilities of the cast, although those shouldn't be forgotten, either. Sadly, one of the best performances is attached to the shortest-lived character, while Evans fits the film like a glove: he's immensely likable, yet quickly dulls the senses. Leave it to Tommy Lee Jones to make an impression, with what amounts to a more smartassed take on Ed Tom from No Country for Old Men. Despite the presence of many players, renegade Nazis, Toby Jones, and nothing less than the power of the Gods being at stake, the narrative loses most of its steam after Rogers' initial transformation. Lacking much in the way of character conflict or palpable drama (it's running on montage fumes by the halfway point), the film shrivels through unrealized media satire, undercooked romance, and an altogether undaunting antagonist (amazingly, given that the role is that of none other than Hugo Weaving), before ultimately sputtering to an unsatisfying stop and yet another reason to be sick of Samuel L. Jackson's eyepatch-adorned face. Good try, Joe, but I can't imagine anyone making worthwhile a script so phone-in and paint-by-numbers. The actual previews for other movies were more entertaining than this two-hour preview for The Avengers. I may bow out of this genre entirely for the time being. Wake me up for The Dark Knight Rises. Or Hellboy III.