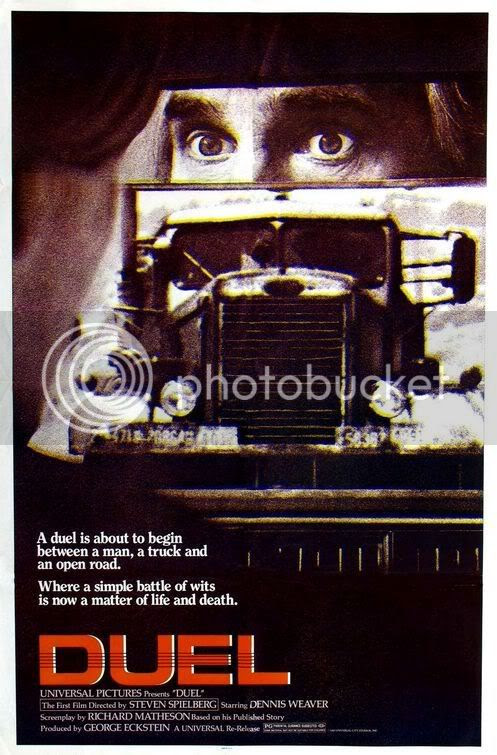 As the cinematic debut of Steven Spielberg (even though it was originally produced as a TV movie, this is as much of a movie as any), Duel has some undoubtedly big shoes to fill, and that's the case whether you think Spielberg is infallible or intolerable. Possibly you're aware that I'm much closer to the former camp, and if there's one thing that keeps me from loving Duel entirely, it's the knowledge that Spielberg would only improve (for many filmmakers, it would be an easy career high). On its own, it's a startlingly pure, assured piece of psychological horror indicative of a major talent with an instinctive approach to subjectivity. Adapted by Richard Matheson from his own short story, it was successful enough on television to get a theatrical re-release years later, and as a result, two primary cuts of the film exist: the 74-minute theatrical cut, and the 90-minute cut expanded for theaters (the only version I've seen, an oversight I intend to correct), and available more or less intact on DVD (some shots and voice over lines have been removed). My feelings about the film haven't changed over the years; even seeing it in theaters, there remained some pacing issues, which isn't entirely unexpected when a filmmaker - especially a young one - tackles a project of such daunting conceptual limitations (hell, even a veteran Michael Mann could only come up with so many in-vehicle camera angles in Collateral). The main (and in most ways only) character here is one David Mann (Dennis Weaver, a superior everyman), who is traveling in his Plymouth through desert country on a business trip; a tanker truck on the rode first annoys, then obstructs, then attempts to kill him, beyond any reasonable doubt. We (the audience) catch an insubstantial glimpse of the would-be killer at least once, but Mann remains entirely in the dark as to the face of his predator. One of the more nail-biting features of the latter 20th Century; it just grazes the edge of existentialism. Seen in his filmography, the film's rusted, growling tanker truck is an obvious predecessor to the man-eating Great White of Jaws, sharing in its pitilessness. And it's every bit as terrifying.