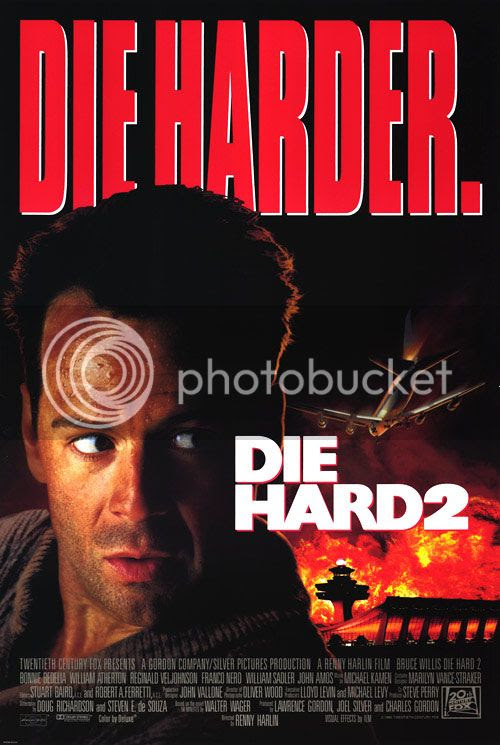 “How can the same thing happen to the same guy twice?” So says Bruce Willis at the outset of Die Hard 2’s terrorist-driven mayhem, verbalizing this sequel’s underwhelming sense of been there, done that self-awareness. Such is a cinematic fate rarely avoided by box office-mandated sequels, and so it is much appreciated that this follow up to 1988’s sweat and blood soaked masterpiece Die Hard is at least tongue-in-cheek enough to acknowledge such adherence to formula. It’s Christmastime again, this time at Washington D.C.’s Dulles International Airport. There, John McClane awaits the arrival of his wife's flight, but not before his pursuit of several suspicious characters and a subsequent shootout in the airport’s baggage section indicates an impending crisis at the miniature metropolis; local police captain Carmine Lorenzo (Dennis Franz) wants to hear nothing from an out-of-town, hotshot cop during the frenzy of the winter holidays, but it isn’t long before the control tower’s resources have been sabotaged and the encircling, unaware airplanes under the control of malevolent forces. Such is an ambitious plot, albeit one riddled with logical deficiencies (why not simply reroute the flights during the 2-minute window conveniently provided by the antagonists?), an unfortunate fact that demands more credit be given to director Renny Harlin for successfully ratcheting up the tension so as to minimize the effect of such narrative weaknesses. Unlike its predecessor, though, this is merely a serviceable action flick, sorely missing both a sense of stylistic clarity as well as the glorious excess this kind of modern western-meets-Indiana Jones affair deserves. The action scenes – loads of squibs and flailing bodies notwithstanding – feel remarkably tame, and we’re forced to settle with the muddled motives of underwritten villains (whose political and financial interests serve the purposes of the script more than any sense of character or theme) in lieu of Alan Rickman’s delicious criminal entrepreneur Hans Gruber. Such as it is, the spotlight of the show is stolen by the unlikely supporting character Art Evans, whose pebble-in-the-cog verbal antics (an out-of-nowhere reference to the Dark Knight proves the film’s comedic shining gem) provide a regular burst of energy amidst such tedium.