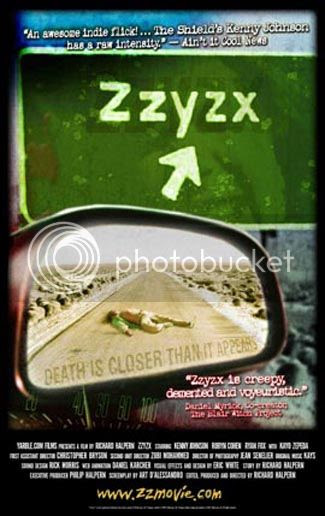 If there exists a well of cinema below the rankings typically attributed to direct-to-video fare, Zzyzx occupies it – one imagines that what little exposure the film has received can be credited solely to its inanely eye-catching title. Sharing the same moniker as a small stretch of road in the Mojave Desert (itself originally named so as to be “the last word in the English language”), the film concerns two guys (most press notes describe them as “friends”, but I see no indication of so pleasant a relationship) on their way to Vegas, their detour to the titular road the result of the excessively reserved Ryan’s (Ryan Fox) having read stories about the location’s supernatural tendencies. Military vet Lou (Kenny Johnson) is hearing none of it, and – when the otherwise barren road presents them with an older man on foot – makes as if he’s going to run him down for the sheer sport of it. Ryan fights for control of the wheel, and – whether Lou’s initial indications of malice were intentional or not – the man is run over and killed. No sooner then he sputters his last words, his wife Candice (Robyn Cohen) is seen on the horizon, in search of her recently acquired spouse. Ryan and Lou stash the body in the car and make cute with the innocuous girl, each having distinctly different ideas on how to handle the situation at hand. What follows brings to mind a cross between Fear and Loathing in Las Vegas’s trip factor and Wolf Creek’s hellish vision of the world, albeit in the most superficially aesthetic means possible (note to all filmmakers: shaking your camera does not automatically make things look realistic and/or stylized), devoid of genuine subtext and barely coherent from one scene to the next, stylistically or otherwise. Eventually, Ryan, Lou and Candice have at each other amidst drugs, alcohol, and sex, nary a moment of their interaction not defying virtually all standards of reasonable or believable human behavior, the entirety of this narrative told in retrospect with scenes of a Mexican family digging up the anti-protagonist’s remains serving as a framing device. Like the rest of the film, these sequences are bereft of implicit meaning (save for whatever convoluted philosophies the filmmakers will bend over backwards to justify), instead serving as some strange breed of faux moral contemplation that suggests an acquired taste I don’t especially want for myself. No indie film this bad would be complete without a plot twist, the ultimate non-revelation only adding to the film’s stale voyeurism. “Zzyzx” may very well be at the end of the dictionary; if so, the film is justly stuck at the bottom of the barrel.