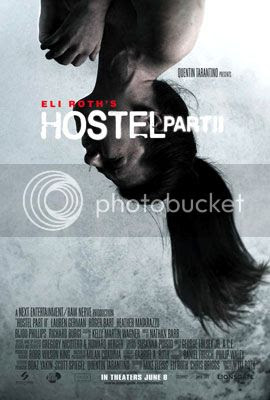 Eli Roth’s latest is a nauseating vehicle of slasher B-movie parts that might have actually risen to the level of “exploitative” had it an ounce of material actually worth exploiting. Many will decry the film for its wanton bloodlust (quite literally, in one particularly off-putting sequence), misogyny and anti-human posturing, and while these are all legitimate claims given this immoral beast of a movie, they ultimately serve to further empower a film that aims to provoke by the most superficial means possible. Like a schoolyard bully, it’s best to simply ignore it outright, although this is a near impossibility given the in-your-face attitude of the onscreen carnage. The film is cruel and sadistic, but so were The Devil’s Rejects and Wolf Creek, two modern horror classics that knew something about tension, suspense, and tongue-in-cheek restraint as a means of illumination into the recesses of the human experience. Entire portions of Hostel: Part II are so over-the-top that it begs a satirical reading, yet such camp hardly seems intentional in a film so completely bereft of irony.

Like the best modern horror films, Hostel: Part II’s chosen subject matter is ripe with parallels to worldwide human conflicts; Roth’s script gives lip service to the immorality and chaos that often comes out of a society on the brink of anarchy, but lip service it remains. The Texas Chainsaw Massacre savagely evoked the American experience in Vietnam through it’s slice-and-dice mayhem. Here, Roth wants desperately to have his cake and eat it too. Hostel: Part II shuns such implicit social examinations in favor of a proudly perfunctory series of unfortunate events, so as to flex it’s Grand Guignol muscles without any un-cool claims to higher legitimacy. Yet, much like it’s equally bullshit-laden predecessor Cannibal Holocaust, this film ultimately gives way to a faux-artsy commentary on its depicted human torture by means of a shallow and unjustified swapping of character motivations. Roth condescends to his characters at virtually every turn, their every action and line of dialogue in service to his superficially provokative bullshit.

Such poseur imitations are certainly depressing, but Hostel: Part II is most reprehensible in its proudly disclaiming any connection to morality. That the film’s most bloodthirsty character ultimately sees the error of his ways when the carnage finally begins is of no redemptive value here, as the film is simply going through prefabricated plot mechanisms without spirit or joy, served up only to legitimate its cowardly torture sequences with the cover of a plot. Roth wants to be as brutal to his audience as possible, but by divorcing his film from any anchor in the complexities of its human roots, the end results are surprisingly tame - there's virtually nothing here that hasn't been done before, better, and with more substance, even if only of the incidental kind. That someone would pay to kill a fellow human being isn't nearly as disturbing as why someone might do such a thing, yet this is a reality lost on such surface-oriented filmmakers, and for a film built so heavily on such strangely motivated characters, such a stunning lack of characterization is a most damning attribute. The film doesn't want to acknowledge the banality of evil, only to exploit it for immediate and increasingly desensitized shocks. One may as well watch a marathon of American beheadings at the hands of Iraqi insurgents with popcorn in hand – the entertainment value is surprisingly comparable. You can add fans of this movie to the list of people I’ll never date.