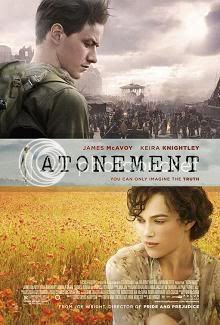 The Oscars have long been losing their worth, and it might appear that the final stake was driven in the heart of it all when the indulgent awards extravaganza stopped being a means and started being an end. Films like Atonement are made (largely, if not entirely) to win awards, carefully pampered and stylized so as to appear ravishing at a surface glance, their carefully manicured posturing frequently lauded practically sight unseen thanks to reinforced obsession with superficial hoopla (the razzle dazzle the two-faced Chicago both criticized and drank deeply from). Far be it from me to lambast convention, an oft-used and wholly inadequate critical take down that mistakes commonality for mediocrity (suggesting that normality by definition has nothing to offer). Atonement, however, exists outside both artistic convention and mediocrity, more closely resembling a fashion show in the guise of a literary classic than an actual living, breathing film. Such a pity that a story so compelling in the details and a production so effortlessly lavished with technical mastery is put to such dullard ends, a cinematic fellatio for anyone easily impressed by set and costume design. In the years preceding World War II, the rich and naïve 13-year-old Briony (Saoirse Ronan) mistakes a series of events involving her elder sister Cecilia (Kiera Knightley) and Robbie (James McAvoy) for sexual malice on the part of the latter. (Spoilers ahead.) When Briony discovers her older cousin being raped on the property surrounding their mansion, she insists the attacker to be Robbie (despite having not seen his face), believing him to be a dangerous sexual predator after inadvertently reading one of his more strongly worded love letters to Cecilia. The schism she thrusts between he and her sisters romance carries into the wartime era, during which time her growing maturity allows her to realize not only the extent of her actions, but Robbie's innocent from the very start of the matter. Say what you will, director Joe Wright is obviously respectful of his material, and it is in this aghast formalism that he misguidedly reduces the richness of Ian McEwan's literary work to its lowest common denominator. His previously overrated Pride & Prejudice sacrificed complexity for narrative compactness, and so too does Atonement seek to streamline all aspects of its narrative (be they character relationships or the presentation of the social climate of the time) in the name of palatability. Even a prolonged single take navigating the war-torn beaches of France is stripped of all feeling, despite being an absolute triumph of technical direction. That's Atonement in a nutshell: compulsively watchable but scared at the thought of alienating audiences with emotions of the truly ugly kind.