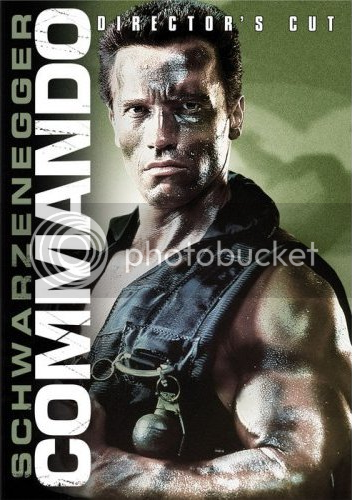 It dawned on me while watching Commando, Arnold Schwarzenegger's 1985 follow-up to his massive surprise stardom in The Terminator, that the man has become far more than the sum of his parts in our culture, a admittedly apparent fact nonetheless growing increasingly more relevant with the passage of time and the man's increased involvement in our turgid political world. Most people pray that they leave their mark on this earth in some substantial way before they die, whether they donate something to science or leave behind their genetic makeup in the form of an offspring. Arnold has nothing to worry about, though; he's become a Paul Bunyan in his own time and the guy still has his hairline. Watching his performances now - especially those from his earlier feature films (to say nothing of Pumping Iron) - it's almost impossible to watch him as simply a performer. As an actor and politician in addition to inimitable cultural icon, his presence has become such that the man and the myth can't be separated. His influence bubbles up everywhere like an unseen reservoir beneath the framework of our society, his most famous character a now long-cliched association with virtually anything having to do with death en mass, and he now the ruler of one of the U.S.'s most prominent states (seriously, when California breaks off into the ocean, Arnold will declare himself high ruler and proceed to take over the world with his self-sustained army). In that vein of larger-than-life celebrity, Commando is an almost-masterpiece with its deadpan satire of Arnold's archetypal human role, the good-guy renegade who'll kill thousands of faceless villains (mostly rent-a-cops and barely-paid mercenaries) just so he can save his little girl (in other words, a perfectly caricatured encapsulation of the Reagan values on the rise at the time).

Even as one of Schwarzenegger's earliest roles, the film's approximation of action convention within a specific cultural and social context (present mostly for show and in a diluted form, but present nevertheless) is potent without effort, a straighter (and arguably greater) example than Edgar Writer and Simon Pegg's Hot Fuzz. A rapid-fire sequence of Arnold suiting up with knives, grenades and makeup that makes him look like a freshly cooked steak whips onto the screen with more macho intensity (not to mention unspoken homo-erotic undertones) than the combined entirety of 300 combined, while Arnold's goofy face - an unlikely combination of convincingly vacant emotions and chiseled muscle intimidating to the point of absurdity (the film itself opens with a ridiculous montage of Schwarzenegger's biceps and abs), here made the comical antithesis to The Terminator's ruthless and truly terrifying killing machine a la Arnold's batty eye motions and calculated, machine-like gestures (these side thoughts interrupt the flow of the sentence too much) - provides the entirety of the film's nth-degree action conventions with the perfect point of illogical comedic contrast. Played with pitch-perfect intensity and unwavering solemnity (like a Sacha Baron Coen performance, the humor is never actually acknowledged to the viewer, just as Borat wouldn't be funny if he were winking to the audience), Commando is an extraordinary representation and send-up of its chosen genre all at once, thrillingly silly in its action sequences (which never want for unreasonable and wholly impossible feats of strength; seriously, Arnold stops just short of throwing tanks at the enemy) and obviously subtle in its clumsy emotional touches. Most heroic protagonists (James Bond or John McClaine) would first attempt to break into a building through a window or an unlocked door so as to go unnoticed; Arnold, never one for fucking around, rips off the side of a wall for easy and immediate access, and similarly tears a seat out of a vehicle so his bulky form can ride relatively out of sight. That the film may have stumbled onto this self-degrading effectiveness wholly by accident - rendering it not so much a brilliant satire but a piece of lazy hackwork brilliantly oblivious to itself - could theoretically make it an even more legitimate success. Actuality over intention reigns, nevertheless, and Commando - as far as representing a rather slim sub-genre of 80's exploitation flicks - represents one of the finest. That the film so precisely captured Arnold's iconography so early in his career speaks to its inbred understanding of cinematic celebrity culture, and, in doing so, seems to have guided everything that has followed since. You're welcome, California!