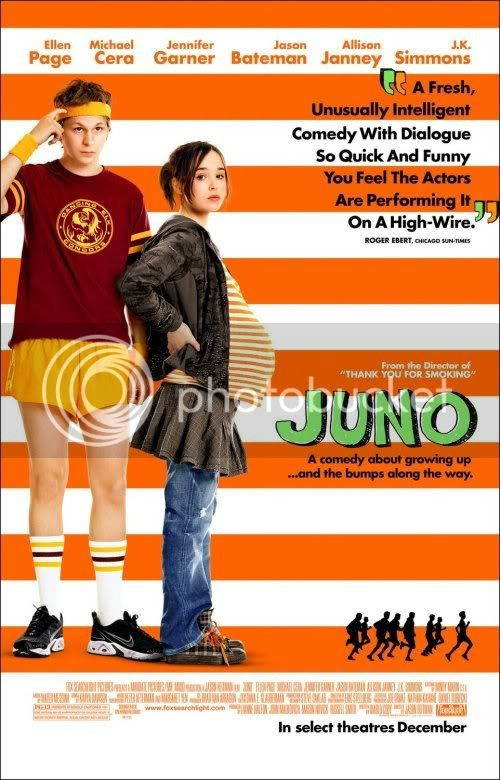 Juno gives me hope for emo culture. The film oozes earnestness out its ears, a quality that is likely to win or repulse different viewers right off the bat given its loose wielding of quirky teenage culture, snarky attitudes that front deeper emotions whose possessors are often unable to articulate them beyond a wall of angst. The film has already been compared to last years non-indie Little Miss Sunshine, although their similarities barely register beyond superficial classifications of the cinema. Concerning Juno MacGuff (Ellen Page), a 16-year-old girl who finds herself an expecting mother after some sexual discovery with her long-time best friend Paulie (Michael Cera), the film is like one prolonged and totally uninterrupted mental doodle, at first scattershot and clumsy but ultimately finding an appropriate groove for its storyline. Like this years similarly plotted (and more blatantly titled) Knocked Up, Juno uses its preggo-centric storyline as a jumping point for more extensive character studies, and it is in this manner that the titular character becomes most interesting. Far from a typical 16-year-old, Juno has seemingly absorbed the entirety of three decades worth of pop culture into her vernacular (at one point arguing over Dario Argento's status as the master of gore): rambunctious, cool, smug and totally unprepared for reality all at the same time. The character first smacks of screenwriting laziness, as if her surreal complexity were but a shorthand to avoid dealing with the usual ramifications of an unplanned teenage pregnancy, but through both the conviction of Ellen Page's performance and the ultimate steadiness of director Jason Reitma's sleight of hand, the film sells the character as a penultimate outcast with far more to learn about herself than she realizes. Occasionally spilled over into manipulative treacle, the film's wit is not unlike the defensive personality of its lead protagonist: a cover easily pulled aside to reveal genuine tenderness inside wanting for acceptance.