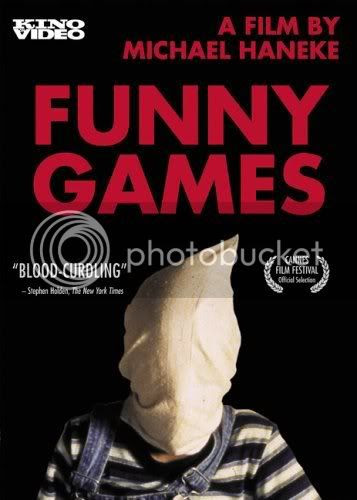 Many have already described Funny Games as an example of cinema-as-thesis statement, and it’s a fitting analysis given how the film functions almost exclusively in theory, the result of connect-the-dot philosophizing that works less like artistic exploration than it does the notebook summary of a college lecture. As a commentary on class values and consumer relationships with violence, Haneke’s film doesn’t invite audience exploration; it pummels them with preordained conclusions, having already reached its proverbial destination before the opening credits have rolled. We first meet the nuclear, upper class family of Anna (Susanne Lothar), Georg (Ulrich Mühe) and Schorschi (Stefan Clapczynski) from above in an extended aerial tracking shot as they approach their lakeside vacation home, a sequence that would recall Kubrick were Haneke’s detached perspective more ingrained in a genuine observation of human behavior than a mere experiment in pain endurance. Heavy metal blares as the characters challenge each other to naming the composers and pieces from their collection of classical music CDs, and the film’s first bit of condescension comes in the form of a throwaway shot of an ejecting CD, the uninterrupted soundtrack assuring us that the effect is one of superimposed irony, thus confirming its own impatience (and simple-mindedness) in getting the point across. If the effect weren’t already one of impending doom, Haneke lingers on the gate at the entrance to the family’s well-furnished abode as it closes behind them, the fortress of the wealthy doubling as an inescapable prison. Here’s where the fun begins.

The stripped down approach taken by the film reads like pure gold, but its functionality is irreparably contrived. It isn’t long after arriving that Anna, Georg and their son are confronted by two effete maniacs—Peter (Frank Giering) and Paul (Arno Frisch)—and their calculated torture mechanisms, first gaining entry to their home via dubious, friendly requests (Peter claims relationship to a neighbor in need of some eggs for cooking), Peter and Paul exploit the uneasy responses to their presence as justification for a series of beatings and humiliations, eventually “betting” the family that none of them will remain alive the following morning. By stripping this pseudo-slasher scenario of all but the most basic elements (read: necessary to get the job done) of plot, motivation, or legitimately developed characters, Haneke aims to wax existential on our purportedly unhealthy relationship to violence through the lens of a disillusioned and impersonal media, and given such shallow and misanthropic exercises in catharsis as Hostel: Part II and the Saw films, his is a conclusion I’m compelled to agree with. In theory. Funny Games may have been truly funny had the film not seen fit to constantly remind audiences of the “joke”, and as the noose on the audience tightens (Anna is forced to strip and her son strangled with a pillowcase, for starters), Funny Games reveals itself as a fraud through its repeated penetrations of the fourth wall whilst repeatedly denying audience involvement save for that of a whipping post. Paul addresses the audience verbally—acknowledging our implicit empathy for his victims—while simultaneously wink-wink, nudge-nudging us into supposed complacency. The film never shocks us with the truly unexpected, just the gruesome and horrific, as Haneke’s methods of toying with audience responses and expectations are as cruel and stupid as those of his supposed protagonists.

Funny Games’ self-awareness epitomizes artsy pretentiousness, forgoing the self-critical reflexivity of both Dario Argento’s spectatorship-challenging gorefests and Hitchcock’s readings of voyeurism as participation. Haneke’s literal-mindedness, though, is no straw that broke the camel’s back; Funny Games purports subversion of genre expectations but its efforts continually smack of laziness. Anna escapes temporarily only to unwittingly flag down her former captors while searching for help, and Paul literally rewinds the film after an unexpected change of events; these and other twists are meant to be profound but they’re nothing more than gags from the latest Scream (or, better yet, Scary Movie) given the elitist treatment. Two images from the film speak effectively to Haneke’s themes: the aforementioned gate closing, and that of a blood-splattered television airing footage of gruesome news reports and carnage-based entertainment, the suffering of the world invading the thought-to-be safe sanctuary of the home. These visual triggers are no less shrill than the rest of the film yet they stand out because they bypass the same lecturing attitude that passes for discourse. In the end, Haneke does little to distance himself from the subjects of his supposed scrutiny, as Funny Games vocally aligns itself with the psychopaths as they draw out their victims’ suffering to Gibsonian lengths (“You shouldn’t forget the importance of entertainment” says Paul, exposing the film’s one-note commentary), cheap gimmickry in the name of simplistic bourgeois upheaval. Haneke’s games aren’t just devoid of rules, but also scrutiny and humility. As self-declared ringleader, he should stop getting ahead of himself.